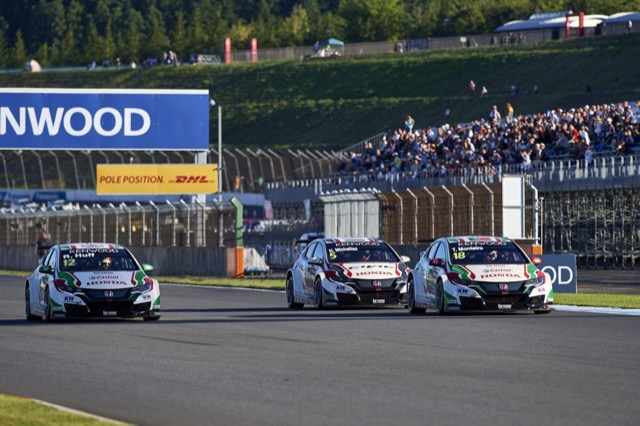 1-2-3 for JAS-Prepared Hondas on the World Stage

Plus a Double TRC Win in Italy!

The Hungarian started the Opening Race from pole position, made a terrific start and controlled the race to take his maiden victory as a factory driver and stretch Honda’s winning run in the WTCC in Japan to four successive years.

It was the fourth WTCC victory of the season for Honda, adding to wins claimed in France, Slovakia and Portugal.

Tiago Monteiro, meanwhile, made a rocket start from seventh on the Opening Race grid and lay fourth at the end of the first lap. He snatched third at mid-distance and held it to the chequered flag.

The Portuguese added another third place in the Main Race to make it four podium finishes out of a possible six for Honda at Motegi and 19 for the season while Norbert and Rob claimed eighth and ninth places; each finishing higher than they started.

Wildcard Ryo Michigami, who drove a fourth factory Civic WTCC this weekend, finished 11th in the Opening Race and missed out on a points finish by less than two seconds. A malfunctioning cool vest caused his Main Race pace to suffer in the sweltering in-car temperatures. He finished 17th.

Tiago’s pair of podiums maintains his second place in the drivers’ championship while Rob remains fourth overall and Norbert moves up a spot to fifth. Honda continues to lie second in the Manufacturers’ Championship.

The 10th round of the WTCC takes place at the Shanghai Circuit in China on 24-25 September.

Meanwhile in Italy, Roberto Colciago took his seventh win of the TCR Italy season at the first of two races in Vallelunga. Colciago started from pole position but slipped to second after an early caution period. However his JAS-prepared Civic was soon back into the lead and held through to the finish.

Maintaining his series dominance Colciago then took his eighth win of the year at the next race, leading from the pole and never looking back. Robert inches closer to the TCR Italy series title with every race.