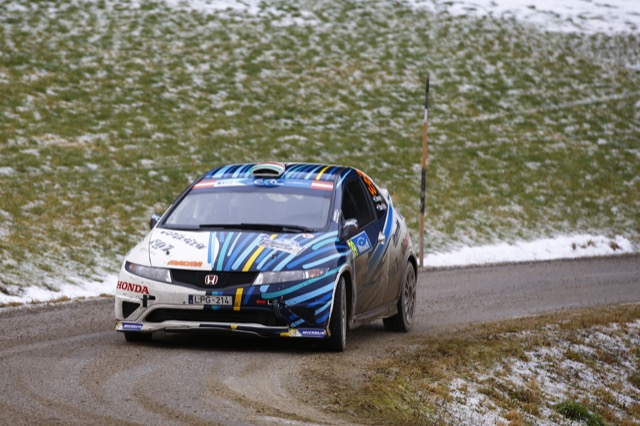 A strong start to 2014 ? six fastest times for the Civic Type R

Zoltan Bessenyey and co-driver Yulianna Nyirfas made a very strong start in the Jänner Rally, the Austrian opening round of the European Rally Championship. The crew of the Civic Type R ended the second day of competition with five best times and moved up to 2nd place in 2WD, providing Bessenyey with six bonus points.

The Civic Type R immediately took the lead against Michaël Bohn and Josef Petak in the 18.99 km long first stage of Pierbach. In the next two stages they had to grant ground gain to the Suzuki Swift S1600 but, after the first leg, the Hungarian pair stayed in the lead in 2WD. The Fiesta of German Raffael Sulzinger, another rival in 2WD, had already given up by this stage in the race.

“During one stage, we had to contend with ice and in another the road was wet from the rain. A lot of drivers made mistakes. It was really tricky,” said Zoltan after the first leg. “My co-driver Yulianna constantly needed to adapt the pace notes. We must not make any errors if we want to score enough points in this race. If we keep up our great start, we should see a brilliant result in this Rally.”

The words of Bessenyey had barely been spoken when he was surprised in the last five km of the second passage of the famous Pierbach stage...

“I couldn’t change gears and was forced to take the car out,” explains Zoltan. The first day came to an end for the Hungarian pair, while the mechanics of Eurosol and J.A.S. Motorsport replaced the gearbox to take  the Civic Type R back up to top form.

“Going on our speed during the first stages, we should be well placed to take the bonus points,” were Zoltan’s words at the start of the second day. From the very first stage, Zoltan matched his words with action and went on to achieve the second fastest time in Gutau - behind Böhm, but nicely in front of Petak and Sulzinger who also took advantage of the possibility to restart through the Superrally.

After the treacherous ice of the first day, the participants got fog, rain and mud during the second day, but once again Zoltan didn’t give in and drove fast and faultlessly. He continued to face a strong battle against Böhm, Petak and Sulzinger - but finally clocked up a total of six fastest times in 2WD.

“One year after our first participation at the Jänner Rally, Zoltan shines of self-confidence. He knows the Civic so well he doesn’t get surprised easily”, said co-driver Yulianna. “The fact that he gained extra experience on ice and in the snow during our race preparation driving in Norway only strengthened that confidence. I’m convinced that we could have reached the finish line in 2WD in first or second position overall if we hadn’t experienced a technical fault. One thing is certain: the championship has well and truly started and we’re competing for the title in 2WD once again.”

The Austrian round ended in disappointment for German Armin Holz and co-driver Sebastien Geipel in the second Civic Type R, as they were forced to retire at the end of stage four.

The next round of the ERC will take place in Latvia on 31 January and 2 February. The Baltic Rally Liepaja will also be the second round of the ERC Ice Masters, and the first fully-fledged winter rally of the season.