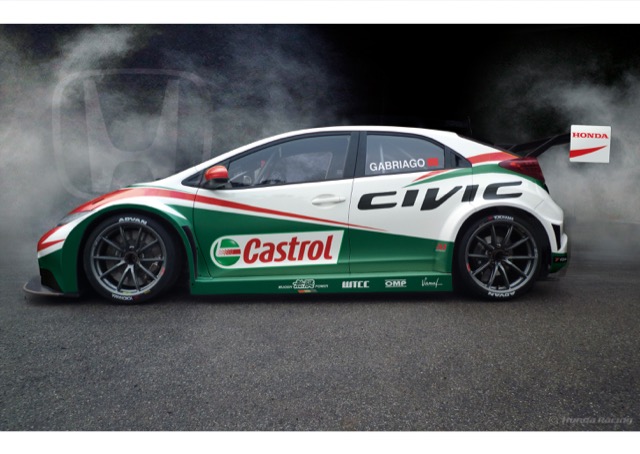 Honda today announced that it will be showcasing the all new Civic WTCC 2014 at this year’s Geneva Motor Show, alongside its Civic Type R concept.

The coming together of the latest ‘Castrol Honda World Touring Car Team’ race car with the Type R concept is designed to reflect Honda’s “Race to Road” philosophy, which explores bringing advances and learnings made from Honda’s extensive motorsport programme to its customers.

The 2014 Honda factory car fully conforms to the latest FIA regulations in the WTCC and sports a dynamic new design. The new car also features a fresh livery for the 2014 season – on display for the first time at the show – which marries the corporate colours of Honda, title sponsor Castrol and co-sponsor, the Brose Group.

Donald Smith, Castrol’s Global Sponsorship Manager, commenting on the new Civic WTCC said: “We are delighted to extend our partnership with Honda, after a first successful season in the FIA WTCC with Gabriele Tarquini and Tiago Monteiro. For us, there is something special about the coming together of two brands with such rich and successful racing pedigrees. The new livery looks absolutely fantastic, with Castrol and Honda once again sharing the red and the white!”

Thomas Spangler, President of Brose Asia, said:  “Brose is really pleased to continue its support not only of Honda, but of Tiago Monteiro, whom we have a long term relationship with. The team’s performance last year exceeded all our expectations and we can’t wait for the excitement and thrill of this season to start. We’re sure it will be another memorable year and are very proud to be supporting them as they look to build on their achievements in 2013.”

Honda R&D and J.A.S. Motorsport have worked together to develop the all new Civic WTCC for this year’s Championship, following the new FIA regulations set for 2014.

The two works Civic WTCC 2014 will be run by J.A.S Motorsport and driven by Italian Gabriele Tarquini and Portugese Tiago Monteiro. Private outfits Zengo Motorpsort and Proteam will also be entering cars for Hungary’s Norbert Michelisz and Morocco’s Mehdi Bennani respectively. Mugen will provide track side support to the entire Civic squad.

The 2014 FIA WTCC will begin on the street circuit of Marrakesh on 13 April 2014, finally ending in Macau on 16 November 2014 after twenty-four races.