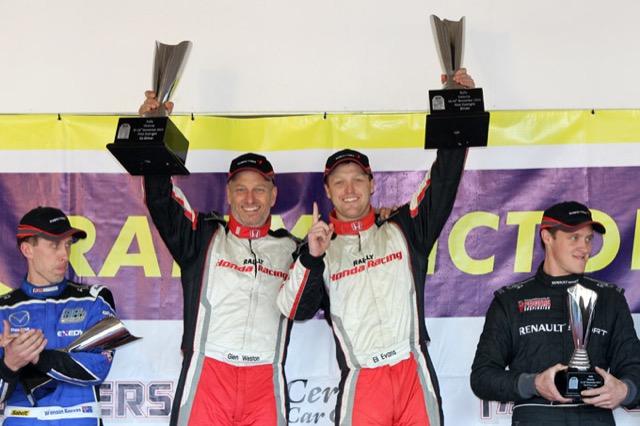 The FIA European Rally Championship will see two new faces compete at the Auto24 Estonia Rally this July – Australians Eli Evans and Glen Weston. Evans and Weston are the current Australian Rally Championship driver and co-driver 2WD champions and their appearance, behind the wheel of the J.A.S Motorsport Civic Type R, will mark their debut in the ERC.

The Auto24, held within the beautiful countryside of southern Estonia, is a new addition to the ERC circuit and is known for its fast, smooth gravel stages and numerous jumps and corners.

“With Zoltan Bessenyey’s limited program this year, we wanted to make sure our rally crew were kept active. Given the success of the Jazz in the Australian Rally Championship and our excellent relationship with Evans Motorsport, we were thrilled to take this opportunity to invite them to try their hand at a European round.

“The popular Estonia Rally bears a lot of similarities to the ARC, both of which are run completely on gravel, and thus it seemed fitting that we chose this particular race for their European debut in the J.A.S Civic Type R.”

Evans and Weston are heroes in their own country, having won the last two 2WD Australian Rally Championships back to back with the Honda Jazz. Last year they also made history after winning a record 12 rallies from 12 starts and are delighted with the offer from J.A.S. Motorsport to compete for the first time on European soil.

“Both Glen and I are very excited about testing our skills against European drivers and teams,” says Eli Evans. “We will do our utmost to achieve good results and will apply the lessons we have learnt from our success in Australia in the hopes of matching this in Europe.”

In preparation for their participation in the Estonia Rally, the Australian team will fly to Europe prior to the Auto24 to attend a test session with J.A.S. Motorsport and familiarise themselves with the J.A.S Civic Type R.