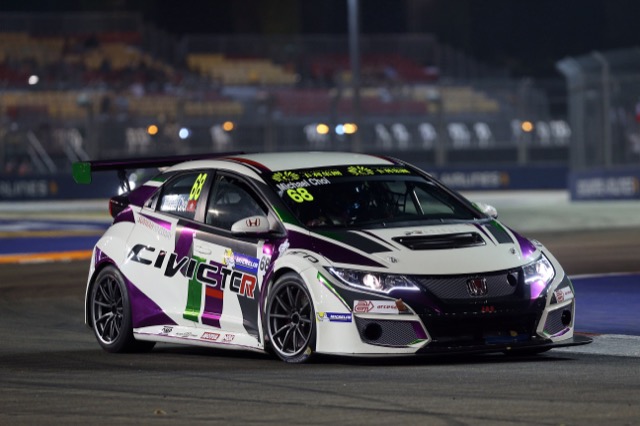 Choi the class of the field in the TCR Asia Series

Contestants in the TCR Asia Series had an opportunity to mingle with contestants in the “big brother” International Series in Singapore. This was an opportunity for them to see how they would shine on the bigger stage and they did not disappoint. The JAS Motorsport–built Honda Civics were front and centre around the 23 turn, five kilometer Marina Bay circuit, with Michael Choi claiming victory in both races.

Race one was under the lights and immediately after Formula One qualifying. While there were plenty of spins, collisions and challenges for his competitors, Choi kept it clean to take an emphatic victory among the series contestants. Teammate Kenneth Lau was unable to finish though, retiring early on.

With the victory, Choi renews his chase for the TCR Asia Series title with in the JAS built Civic, the Hong Kong-based driver close behind in the title race. “It is very nice to win among the TCR Asia cars,” Choi admitted post-race. “I wasn’t expecting that and I thank my team for the very good work. I was lucky that some of my quicker rivals got tangled in incidents ahead of me. It was a very interesting experience to race with the drivers of the TCR International Series. Their level is very high and I can learn a lot from them. I’m looking forward to race two, and trying to get to the top of the points table.”

Early on Sunday morning and ahead of the Formula One Grand Prix the contestants were out again for race two. And once again the champagne was reserved for Michael Choi, with back-to-back victories in the JAS Civic. While Lau came through to a solid third in the second Prince Racing car, the stewards initiated a penalty for an alleged jumpstart.

The series resumes in Thailand at the end of October.