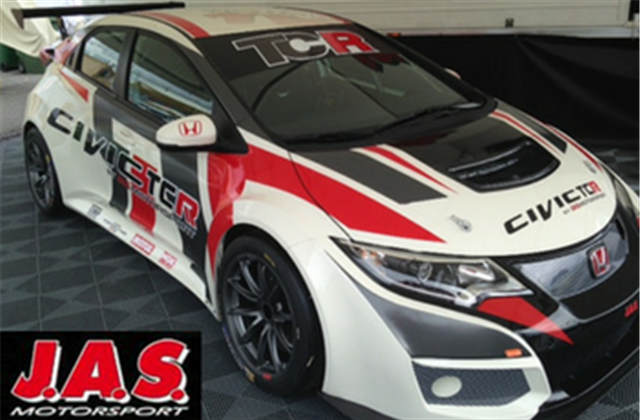 All Efforts Now Focused on an Even Better 2017!

JAS Motorsport concludes an astonishing year with no fewer than 65 wins at racetracks around the world using various versions of the highly successful Honda Civic. JAS has been able to successfully develop cars that meet the specification of a number of regional and international series. They’ve been proven to be highly competitive, with a total of five outright championship wins recorded at the end of the year.

The Castrol Honda World Touring Car Championship Team employed a trio of Civic WTCC cars built by JAS Motorsport for the season. The campaign got off to a very impressive start with two outright wins in France and Slovakia. The first was recorded by new signing and former world champion Rob Huff and the second by Tiago Monteiro.

Morocco was the scene of a sensational 1-2-3 finish for the team, with third team member Norbert Michelisz coming in between Huff and Monteiro on the podium steps.

Monteiro was to recover from a nasty mid-season crash to score an emotional win on his home track in Portugal, while another 1-2-3 finish was to be seen at Honda’s home ground in Japan, with Michelisz leading the trio on this occasion.

In addition to these victories the team was also able to secure five wins in the new-for-2016 Manufacturers Against the Clock MAC3 division, held at the start of race weekend at each venue. These competitions pit each team of three cars against their opposing teams, with the fastest aggregate time determining the winner.

The TCR International Series goes from strength to strength in its second year. JAS Motorsport prepares the cars entered by the West Coast Racing team and it was veteran driver Gianni Morbidelli who took the first win for the Civic TCR at Estoril in Portugal.

Young Finn Aku Pellinen then recorded a breakthrough victory at the testing Spa track in Belgium, while another new signing to the team, Mikael Grachev scored his own maiden win at the iconic Italian circuit of Imola.

Grachev was the star once again at the Salzburgring in Austria. The Russian driver was proving to be one of the revelations of the series and scored another great victory at his home track in Sochi, followed by a lights-to-flag win under the lights in Singapore.

Robert Colciago capitalised on his dominant form in winning the regional TCR Italy series by appearing as a guest driver for the Target Competition team in Malaysia, winning on his first time out in a car that’s part of the JAS Motorsport customer support program.

The weekend in Japan was to prove very successful, as American driver Kevin Gleason duly recorded his first win of the season in the West Coast Racing Civic TCR. But it was Monteiro who would provide a book-end of wins for JAS-prepared Civic TCRs with an excellent victory at the very challenging street circuit in Macau.

Rikli Motorsport fielded a team in the TCN2 category and it was the newcomer, 21-year-old Kris Richard who scored an amazing win in his JAS Motorsport-built car. Richard battled valiantly through the season, going into the last round level on points and taking a hard-fought title in Imola. He was ably supported by fellow team driver Peter Rikli.

Martin Xie scored an excellent victory in the 1.6 Super Cup Category of the Chinese Touring Car Championship in the DongFeng Honda, JAS-built Civic. Team drivers were able to score no less than 10 victories throughout the season.

in one of the most highly competitive touring car series around the world, British driver Josh Files was able to secure a dominant series win in his JAS-prepared Civic. The high level of competition in this series was often illustrated when the regional drivers moved up to the international campaign and frequently performed toward the front of the field. Files, driving a car entered by the Target Competition team, was ably supported by Steve Kirsch and Domink Fugel (driving with Fugel Motorsport) to record a tally of no less than nine race wins along the way.

Stephane Lemeret enjoyed a successful and consistent season to take the TCR Benelux Series in style. This TCR regional series runs to a different format and features four sprint races each weekend. Drivers in JAS-prepared Civics took a total of 11 wins through the season in the hands of Benjamin Lessenes, Renaud Kuppens, Monteiro, Michelisz and Lemeret, all ably fielded by the Boutsen-Ginion Racing team.

JAS Motorsport is now busy creating cars for the 2017 calendar year and is looking forward to an even more exciting and successful racing season ahead.