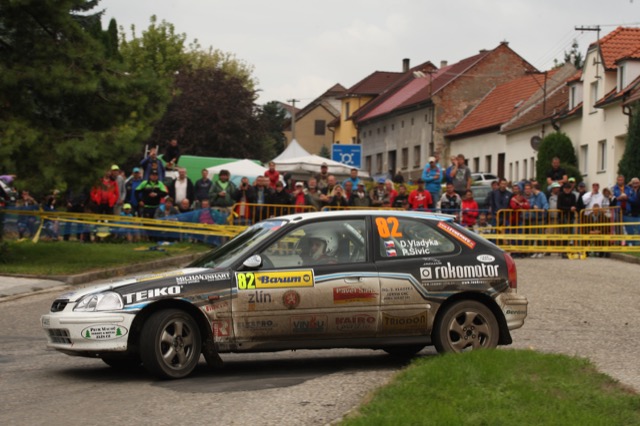 Zoltan Bessenyey and co-driver Julianna Nyirfas finished 3rd in the 2WD class of the Barum Czech Rally Zlin, the 8th round of the European Rally Championship this weekend. The result means that Bessenyey increases his lead at the top of the 2WD Driver Championship, and is now 53 points clear of compatriot Lukacs Kornel - who was forced to retire in the 15th and last special stage.

“I’m very pleased that we were able to finish and score points at our first Barum Rally,” said Zoltan in the service park after the rally.  “That we managed to reach the podium too is all thanks to an almost faultless drive.”

Yet despite the result and the team’s thorough inspection of the course prior to the rally, nothing prepared Zoltan and co-driver Yulianna for the intense battle they had to endure.

“During every special stage you’re presented with a different situation every 500 metres. One moment you’re driving through the village centre, the next you’re going through a forest on a very broad road, followed by a technical section, and all of that at a high speed. It’s a real challenge and it forces you to not take any unnecessary risks.”

Such a cautious approach would have benefited Kornel Lukasc, second in the 2WD Championship and major rival of the Honda driver, who suffered a puncture in SS3.

Halfway through SS6 it also started raining, taking Hannes Danzinger, Bessenyey’s other main rival in 2WD, by surprise and causing him to damage his car. In the same Trojak stage, Lukacs was forced to drive on another ‘leaky’ tire and Hermann Neubauer spun off. However Zoltan kept his cool and moved up to 7th place.

In special stage 7, Bessenyey was seven seconds faster than in the previous passage and climbed up to sixth. And this was despite an almost terminal roll!

“After a jump, I was confronted by a rock lying on the road in front of me and my first reaction was to avoid it. But this caused me to move sideways for a moment, slip off the track and into a ditch! Was it the speed or was it luck? The fact is we could get out of the ditch and back on the road again pretty swiftly! The result was a slightly damaged bumper and… my first big fault behind the wheel of the Eurosol Civic Type R this year!”

He ended the first day of competition in 6th place in 2WD, providing the Hungarian with two bonus points.

When awakening on Sunday morning, Zoltan and his colleagues were confronted with another painful fact: the whole region of Zlin was covered in cloud and heavy rainfall had begun to fall. But as is typical of the rally, there were still pockets of clear weather where the sun came broke through…

“At one stage there was sun and the conditions were dry and at another there was rain. It was a really tricky business,” said Zoltan, who moved up to 3rd after Hermann Neubauer retired and getting the better of German Raffael Sulzinger after a close battle in the very last stage. “It was hugely satisfying that the Civic Type R drove without any problems throughout the whole competition and again, there was the fantastic support from the crew of Eurosol and J.A.S. Motorsport. And by scoring three bonus points in Day 2, plus fifteen points for the final 3rd place it felt like it was mission accomplished!”

The next round of the ERC will take place in two weeks at the Lotos Rally in Poland. Celebrating its 70th anniversary this year, the spectacular gravel event is driven through Poland’s breath-taking Masurian Lake District and will have Mikolajki as its host town.