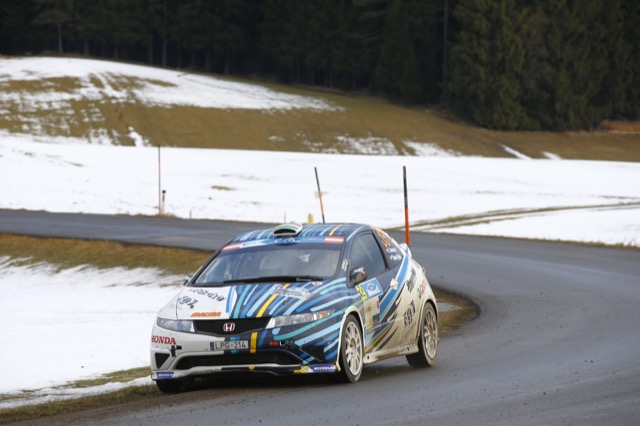 After clinching a stunning 2nd place in the snow and frost of the opening Austrian round of the European Rally Championship back in January, it’s been a bit of a wait for Zoltan Bessenyey and co-driver Yulianna Nyirfas to get back behind the wheel of their Eurosol Racing Team’s Civic Type R.

The Hungarian pair chose to skip the Baltic Rally Liepaja in Latvia, the second round of the ERC Ice Masters, and then the Sibiu Rally in Romania, which was the first time it was to be held during the winter months, was cancelled.

This weekend sees the duo back in action though and fighting for points in the altogether warmer climes of Greece for the Acropolis Rally.

It’s the first time that the Acropolis Rally has been held in March, and it’s also the return of the popular rally to the ERC after an absence of almost 50 years.

Another revision is the format. Whilst the town of Loutraki - on the banks of the Gulf of Corinth – has been the home for the Greek classic since 2009, this year day one will be driven on tarmac. With the exception of the all-asphalt Super Special in the town of Korinthos, it will only be on day two that the competitors return to the event’s more traditional and technical gravel stages.

Commenting about the Greek challenge ahead of him, Zoltan said: “You can compare the first day of the Acropolis Rally with the fast stages in Croatia. So I expect everybody to drive very hard to secure positions before starting the second day. The second day actually evokes memories of the stages in the Romanian Sibiu Rally, where you’re under constant pressure on the gravel and rocky roads to save the car and avoid punctures!”

The focus for the drivers is not just on this, the third round of the ERC either, but also the wider battle for the 2014 2WD Championship.

“Romanian Alexandru Filip returns to the ERC this weekend and has got another five ERC rally’s planned after Greece. And then there is Bulgarian champion Todor Slavov, who we saw dominating in the IRC round in his own country in 2012. My mission will be to keep driving ahead of them, to obtain the first victory of the season for the Civic Type R and to score full points. Because the goal this year is and remains a second title in 2WD. So this rally really does count: we can’t afford to make any mistakes.”

The Acropolis Rally starts on Friday 28th March with the Qualifying Stage. The competition continues on Saturday 29th March with the first of six stages on asphalt and the finishes in Loutraki at 23h00, after a total of 124,62 km. The drivers will face seven further special stages, but on the typical Greece gravel on Sunday 30th March. In total the rally encompasses 238,84 kilometres against the clock, with the first car crossing the finish line at 17h16.