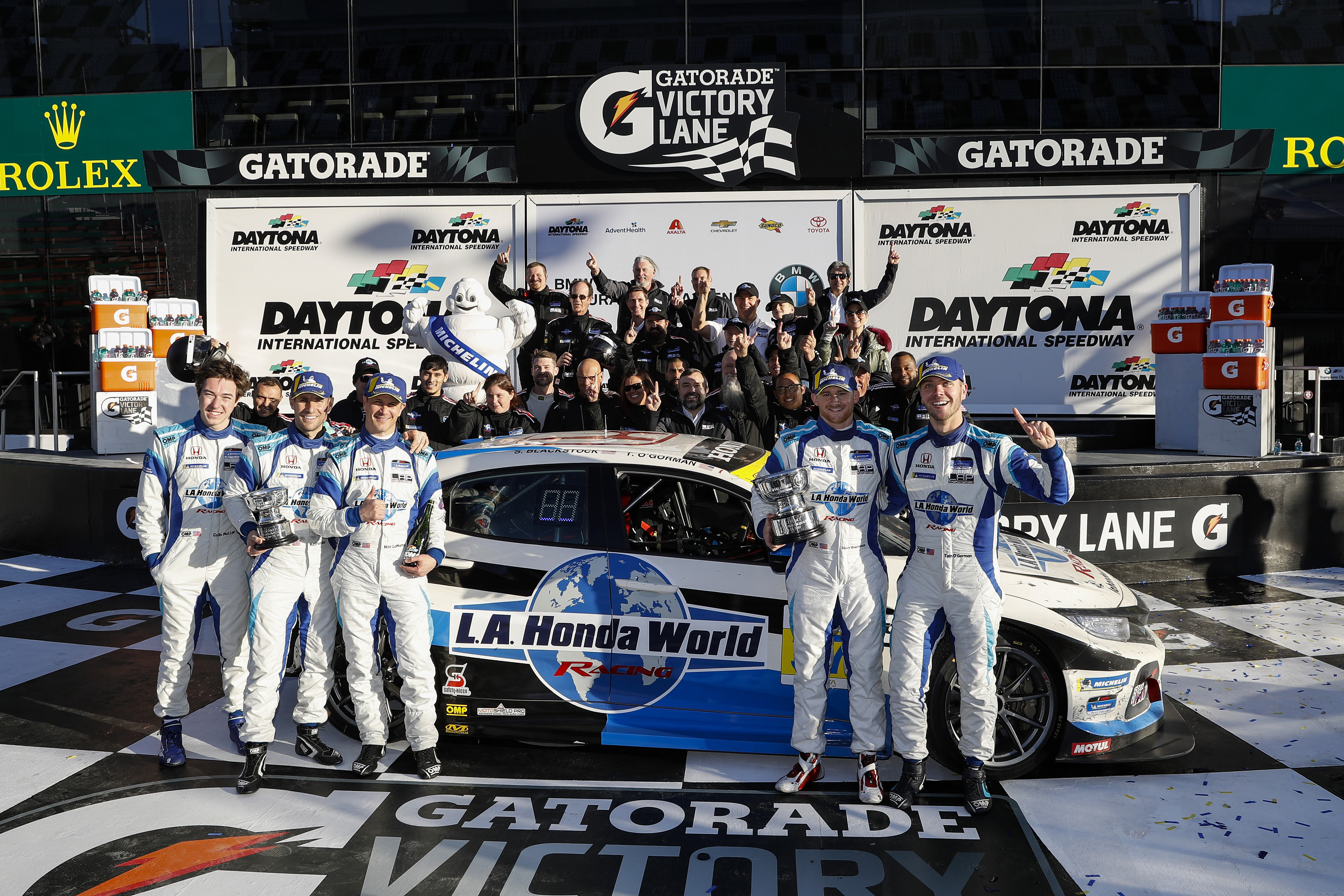 The Honda Civic Type R TCR scored an incredible one-two finish on its debut at the legendary Daytona International Speedway and claimed a dominant double-win as TCR Middle-East kicked off its 2019 season.

Shelby Blackstock and Tom O'Gorman triumphed at Daytona for the LAP Motorsports-run LA Honda World Racing team; biding their time for most of the four-hour IMSA Michelin Pilot Challenge opener before striking on a safety-car restart with 12 minutes left.

Snatching the lead, O'Gorman got the hammer down and won by just under two seconds from the sister car of Mat Pombo and Mike LaMarra.

IMSA debutants Atlanta Speedwerks were set for victory when Todd Lamb suffered a left-front puncture while leading comfortably with 30 minutes to go in the car he shared with Brian Henderson. They finished fourth.

A cut tyre also spelt the end of the race for the third LA Honda World Racing car of Colin Mullan and Max Faulkner, which had climbed to fourth, just a couple of minutes later.

HART pair Ryan Eversley and Chad Gilsinger endured a tough debut; their car lacking straight-line speed after the team was given prototype-specification fuel by mistake.

The pair still managed to brilliant climb from 14th to fifth, but their race was ended by contact at the halfway point.

Just hours earlier, Rene Munnich had given the car a fantastic TCR Middle-East debut at the Dubai Autodrome.

Driving for his own ALL-INKL.com Munnich Motorsport team, the German qualified on pole position and easily won the opening race.

He then added a second victory in the reversed-grid second encounter and later joined forces with Luc Breukers for the six-hour endurance race to leave himself at the top of the Drivers' Championship.

TCR Malaysia continued the following day at Sepang. Paul Ip secured pole position in the Cup class for KCMG for a second straight event, and he finished second in class - and third overall - in a wet opening race.

Kenneth Lau claimed a pair of fifth-place finishes while Prince Racing team-mate Michael Choi was eighth and sixth. Prince lie second in the Teams' Championship while Ip is best-placed in the Cup standings in fourth place.

Mads Fischer, JAS Motorsport TCR Project Leader, said: "It's not normal to have Fridays like this, and it’s incredible. LAP Motorsports and LA Honda World Racing have achieved an incredible result on their first time out with the Civic Type R TCR, and each of the three teams that contested the IMSA Michelin Pilot Challenge race all showed good speed with only some very unfortunate circumstances preventing even better results. After winning the Super Taikyu title in Japan last year, and running strongly at the Dubai 24 Hours two weeks ago, we knew the Civic Type R TCR was well-suited to endurance racing, and this is further proof. It's very pleasing to see ALL-INKL.COM Munnich Motorsport winning twice in Dubai with Rene at the wheel, and to see Paul Ip score another pole position for KCMG at Sepang. We're truly off and running now." 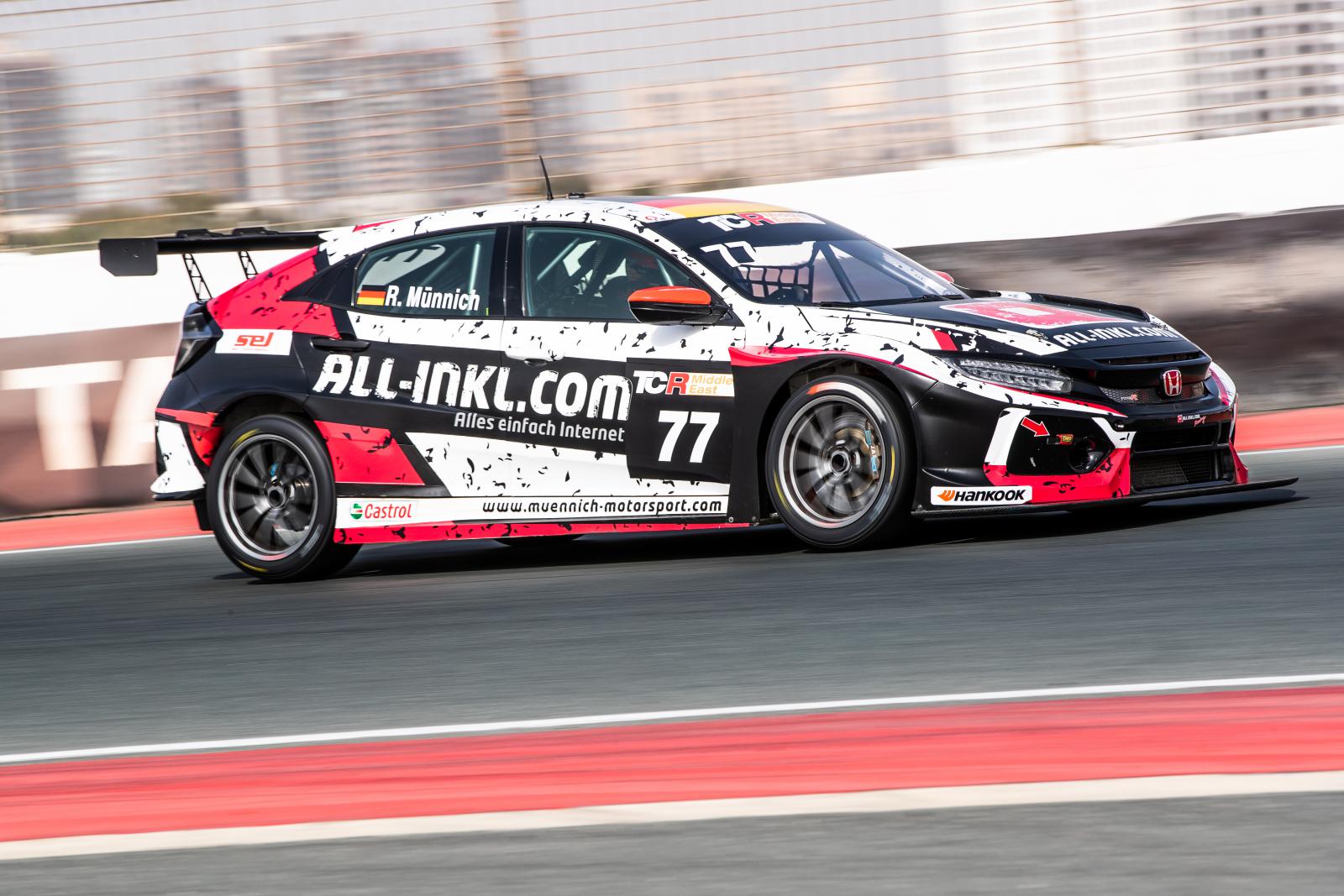