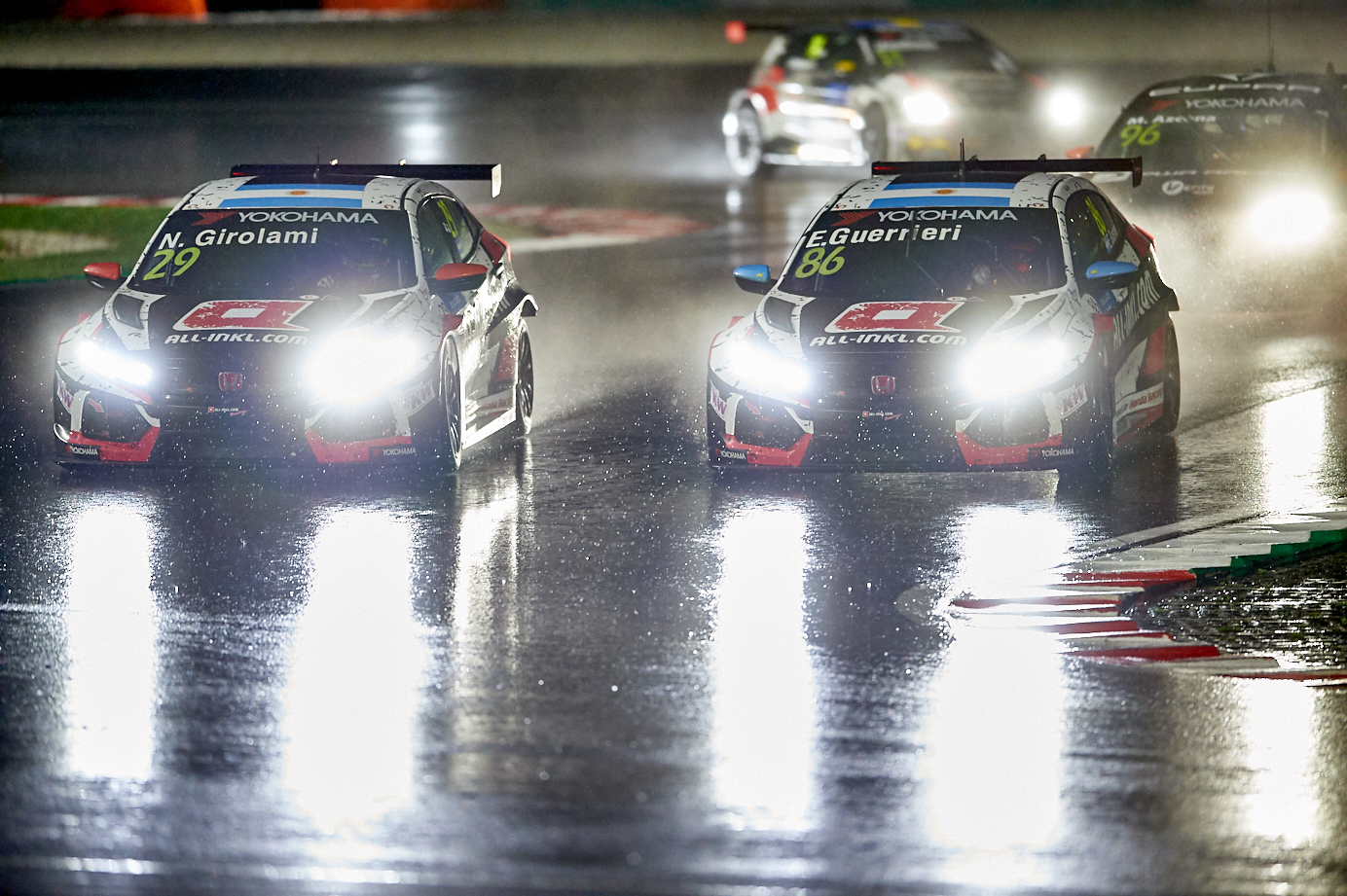 Esteban Guerrieri was robbed of the WTCR – FIA World Touring Car Cup in a controversial season finale at Sepang, Malaysia, as the ALL-INKL.COM Münnich Motorsport driver was punted off the track while on-course for the title.

Trailing his chief title rival by 10 points coming into race 30 of 30, having already won the second race in atrocious weather conditions, Esteban moved his JAS Motorsport-built Honda Civic Type R TCR into the lead at the second corner after a brave wheel-to-wheel battle with his chief rival.

He was on course to win the championship by two points when he was hit hard up the rear by and ran off the track; an incident for which his assailant was penalised 30 seconds post-race.

His radiator filled with grass, Esteban’s car began to overheat, forcing two pitstops to have debris removed that dropped him to 22nd at the chequered flag.

That result ensured the Argentinian finished second in the Drivers’ Championship; his best-ever end-of-season finish in the points table.

Earlier in the day Esteban drove bravely to climb from 10th on the grid to fourth place in a damp first race, before turning in one of the performances of the season in dismal weather in Race Two; opening up an 11-second lead before the safety car ensured a closer finish.

Team-mate Nestor Girolami’s decision to opt for a full set of wet tyres for the opening race proved wrong as he fell back from third to 22nd.

With everyone on full wets in Race Two, he recovered to finish fourth – having also been a victim of contact – and added fifth in the finale to ensure the Münnich team – who won seven times this year – finished third in the Teams’ Championship.

KCMG wildcard Joao Paulo de Oliveira turned in an incredible performance on his series debut; the Brazilian going from 13th on the grid in the opener to fifth place by the finish after bravely gambling on a full set of slicks in the damp conditions.

It was the best finish by a wildcard this year and was accompanied by the fastest lap of the day as Civic Type R TCRs achieved this accolade in all three races (Guerrieri doing so in Races Two and Three).

One of a number of drivers to go off through the gravel on the opening lap of Race Two – which triggered a red flag – he battled back to 18th, but did not finish the final race.

Team-mate Tiago Monteiro sealed a strong result in the finale with sixth spot from 16th on the grid, and the Portuguese was 12th in Race Two, but retired from the opener with a bent steering arm owing to first-lap contact from another driver.

Attila Tassi, in the third KCMG car, climbed from 21st to 13th in Race One and was. One of only three drivers to start Race Two on wets; rocketing up from 12th to third by Turn 1, only to be hit drop back with damaged suspension. He retired from the race and could not start the finale.

Esteban Guerrieri, ALL-INKL.COM Münnich Motorsport, said: “I’ve really enjoyed the whole year. Today was decided on one result, but that’s life. I’m glad to be finishing in second position and fighting for the championship. In the last race, [Mikel] Azcona hit me in the back and put me on the grass, filling my radiator with grass. I had to pit and that was that. I’ve really enjoyed driving today, all the way to the last lap. The team have done an incredible job this year and JAS have built a fantastic car. They deserved the championship. We left nothing on the table. So I’m so disappointed for them as well as for myself, but I’m proud of the job we’ve done.”