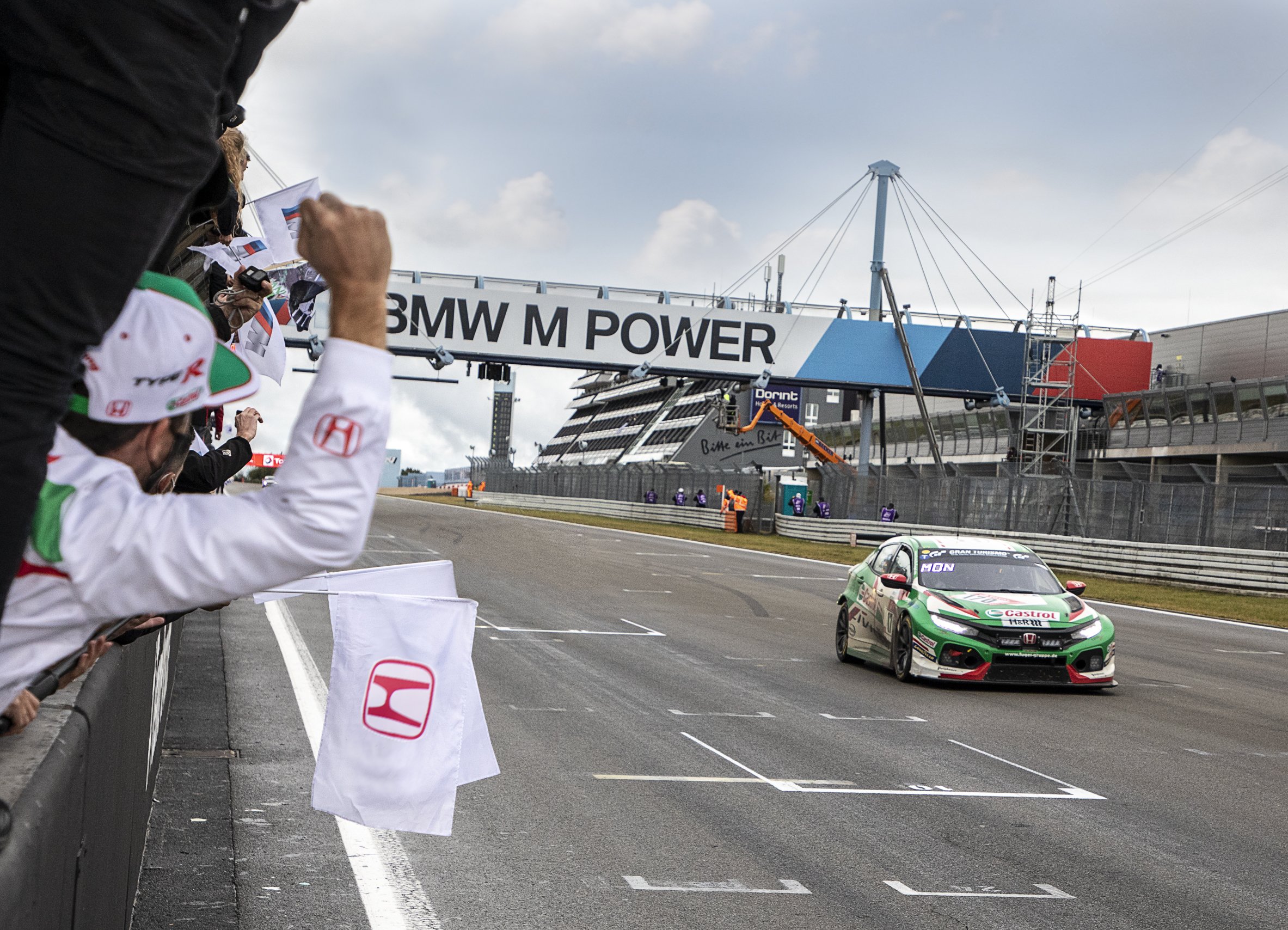 The Honda Civic Type R TCR scored a magnificent second Nurburgring 24 Hours victory in a row on a weekend when the JAS Motorsport-built car triumphed in several series.

Tiago Monteiro, Esteban Guerrieri, Dominik Fugel and Markus Oestreich qualified fourth in the TCR division, but hit the front in the second hour with Fugel - the current TCR Germany points leader - at the wheel.

The quartet held their concentration through the most challenging conditions imaginable on the 25km Nurburgring 'Nordschielfe', and were still ahead when the poor weather necessitated eight hours of red flag-induced inaction.

When the race resumed on Sunday morning, their relentless pace continued as their advantage steadily increased from a little under three minutes to just over one lap by the time Monteiro took the chequered flag.

Monteiro, Fugel and Oestreich were three quarters of the line-up that had triumphed in 2019, while Guerrieri scored his first 24-hour race win.

Guerrieri had already triumphed on Friday as a daring 'around the outside' move on a damp circuit gave the Argentinian and ALL-INKL.COM Munnich Motorsport a second WTCR - FIA World Touring Car Cup victory on the Nordschleife in three years.

He finished fifth in Race Two to move up to sixth in the points while team-mate Nestor Girolami - still second in the points - scored an outstanding pole position on Thursday and ALL-INKL.de duo Attila Tassi and Monteiro recorded best results of third and eighth.

Pepe Oriola scored his first TCR Europe victory with an excellent 'around the outside' move at Monza's Parabolica on Sunday to give Brutal Fish Racing Team a second win of the year.

Profi Car Team Halder duo Mike and Michelle Halder both proved fast on the weekend, but Michelle's ninth spot in Race One was the highlight as Mike was twice eliminated.

Having started fourth, the duo gradually moved forward throughout the two-hour race to finish second; the team's best result of the season.

Hagler followed-up that result with her first career pole position and she and Eversley were on-course for victory in Sunday's second race when a turbo issue put them out of the race with just 20 of the 160 minutes left.

A consistent run to a pair of podium finishes at Ring Djursland kept Kasper H Jensen on top of the TCR Denmark standings.

Jensen finished third and second to maintain his advantage, while the Massive Motorsport team remain on top of the Teams' rankings. Team-mate Kenn Bach twice finished on the podium in the Trophy class and is second in the category standings.

Casper Elgaard, a treble winner last time out at Jyllands Ringen, was eliminated from Race One after contact and did not finish Race Two either due to a braking issue on his repaired car. He's seventh in the points.

Rio Shimono scored another pair of TCR Japan pole positions in the bronze class at Okayama, and finished second in Race One to retain her category lead in the Saturday Series.

She won the class in Race Two, but was later penalised 30 seconds for contact while seizing the advantage and dropped to fifth, a result that leaves her second in the Sunday points and her Drago Corse team third in the overall entrant rankings.

Resshu Shioya qualified second in class for Zenyaku Kogyo by Team G/Motion, but did not start either race.

Mads Fischer, JAS Motorsport TCR Project Leader, said: "Words can't really express how proud we are at JAS with this result, which both shows the speed and reliability of the Honda Civic Type R TCR, but also the incredible effort of Fugel Sport and Honda Germany. This result proves that a small and efficient customer team with good drivers can triumph against a full works-backed squad with a one million-euro budget. To do it once could be seen as lucky, but to repeat it shows just what an outstanding job they've done. I'd also like to congratulate ALL-INKL.COM Munnich Motorsport and Brutal Fish Racing Team on their victories and LAP Motorsports for coming so close, because TCR racing is extremely well balanced between the brands right now and winning is so difficult." 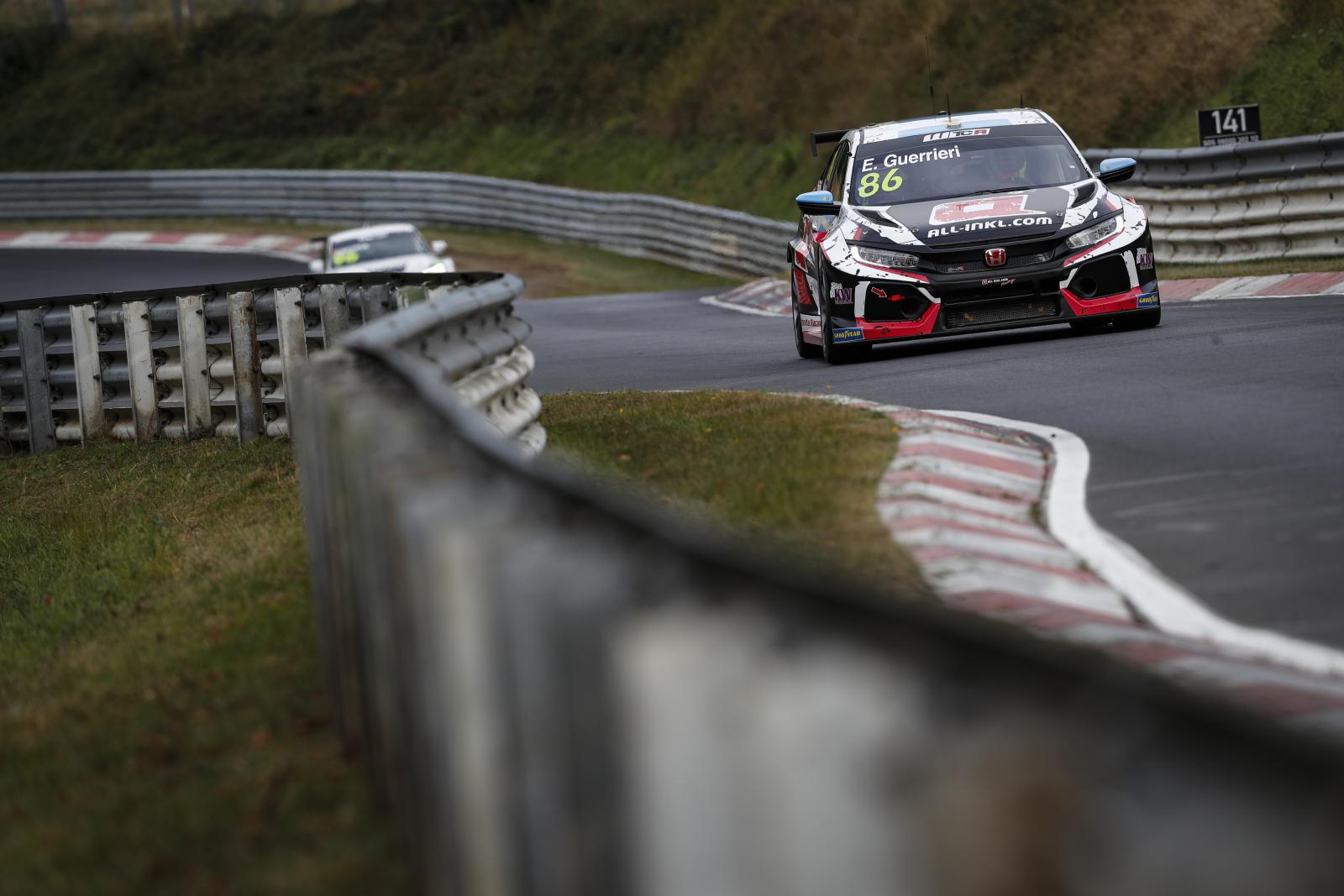