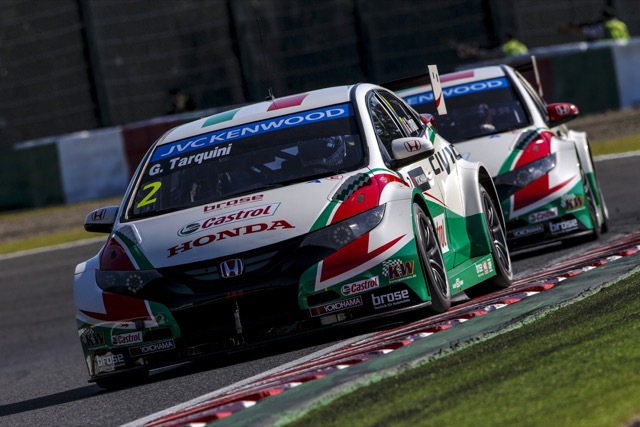 Today’s qualifying sessions for the FIA World Touring Car Championship at Suzuka, Japan proved a disappointment for the Honda Civic drivers following the winning success at the previous race in China. The four Honda Civics didn’t match the pace of the competition with the Zengo Motorsport Civic of Norbert Michelisz setting the 6th fastest time, the Castrol Honda cars of Gabriele Tarquini 10th followed immediately by team-mate Tiago Monteiro and the fourth Civic of Shanghai victor, Mehdi Bennani, in 12th position. The only consolation is that Tarquini will start from pole position on the grid for Race 2 tomorrow when the grid is reversed for the second race.

The long 5.8km lap of the full Grand Prix circuit here at Suzuka is a fine combination of fast flowing curves, tight switchback corners and long straits. With lap times over 2 minutes the drivers get very few laps in the qualifying sessions to master the intricacies of the circuit; single flying laps regularly determining grid positions. The 11 lap races may prove a different story when tyre wear becomes an important issue.

“We are still suffering from the lack of development time before the start of the season”, explains Alessandro Mariani, Managing Director of J.A.S. Motorsport. “I know this sounds like the same complaint but really, it is an immense task to recover the lost 6 months. We have collected a mass of data from the cars and that is the core material for our winter development to be fully competitive for 2015.”

The drivers were also disappointed with the performance. “We were 3rd and 4th fastest in the free practice sessions,” said Gabriele. “I was 5th in Q1 but I could not reach that as the Q2 session was quicker. I tried to be faster but made a small mistake. My plan is to keep safe in race 1 and then fight from my pole position to get a podium in race 2.”

Tiago Monteiro was also frustrated. “With so few laps I just did not seem able to get the rhythm and on my last lap I went over the kerb and that lost me time. It is not going to be an easy day tomorrow but we will keep fighting.”

Sixth fastest put Norbert Michelisz highest of the Civic drivers on the grid. “Once again I am on row 3 for both races so will be in a battle from the start! We have seen before that the Civic is very consistent and we must hope we are running better than the others at the end of 11 laps. I’m 5th in the Drivers’ Championship so I want to collect as many points as possible this weekend.”

Daisuke Horiuchi, Large Project Leader for WTCC development from Honda R & D is looking to the future. “Like all Honda fans, we were looking to better qualifying results and it is up to us now to study the data and identify the areas that need work to improve the overall on-track performance.”