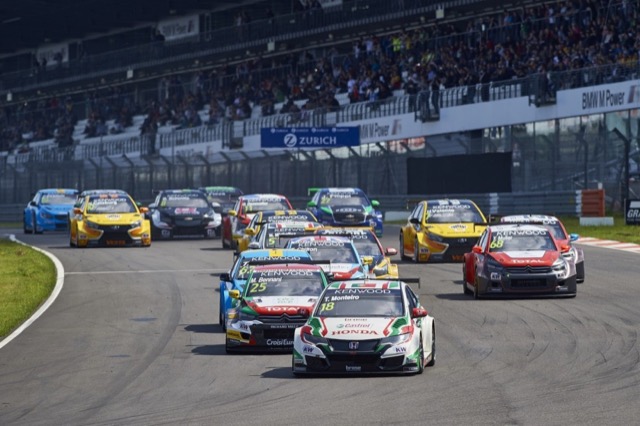 Honda secured a double podium finish with the JAS-prepared Civic WTCC. Norbert Michelisz led the points tally at the fifth round of the 2016 FIA World Touring Car Championship at the Nürburgring in Germany on what was a challenging weekend.

Norbert fell to eighth at the start of the opening race as he was forced to swerve to avoid a slow-starting rival. But a combination of well-timed overtaking manoeuvres and problems for others allowed him to rise to third by the chequered flag.

From second on the main-race grid, he seized the lead into the first corner and did not panic when overtaken on the ‘Grand Prix’ section of the Nürburgring. Strong pace throughout the race resulted in a second-place finish; just half a second from victory.

Equally good news came in the shape of Tiago Monteiro emerging shaken, but mercifully not badly injured, from a high-speed accident while leading the opening race on the ‘Nordschleife’ section of the fearsome 26km circuit.

Victory was a strong possibility for Tiago. From pole position, the Portuguese driver held the lead in his JAS-prepared Castrol Honda World Touring Car Team Civic before he suffered a puncture at high speed on the final lap.

Tiago hit the barriers hard and was taken to hospital in nearby Adenau for checks before being thankfully released with nothing more than bruising.

His accident promoted Norbert to the final podium position and Rob Huff to fourth; the 2012 WTCC champion having driven superbly to climb from 16th on the grid after an engine-change penalty caused him to start from the back row.

Rob added another fourth place in race two, the Briton visibly quicker than rival Tom Chilton in the corners, but unable to keep pace with his countryman on the long straights.

The results mean that Tiago, Rob and Norbert retain their second, third and fourth positions in the drivers’ championship, but are now separated by just four points in total. Honda continues to hold second in the manufacturers’ championship.