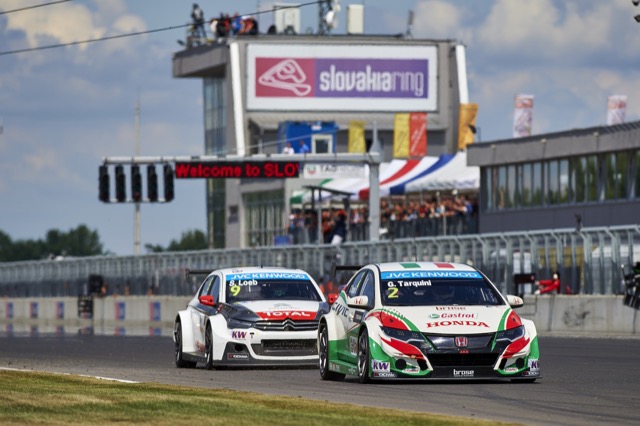 - Gabriele Tarquini finished twice in the points with 6th & 4th

True to form, the Castrol Honda Racing Team Civics both made lightening getaways off the line in the first of today’s two FIA WTCC races in Slovakia, immediately displacing those around them and gaining invaluable positions in the pack.

It was a close call for Tarquini – the quick-thinking Italian charger taking avoiding action as the lights went out to get by the slower starting Ma ahead. By the end of lap one the leading JAS Motorsport-prepared Honda had progressed from 9th to 6th, not first without indulging in a tense three-abreast bit of wheel-to-wheel action with Huff and Valente.

Tiago Monteiro was also a man on the move. Lining up 17th on the grid, Monteiro’s impressive kick-start getaway was once again played to perfection, picking off the competition around him. Running in 11th just behind Norbert Michelisz, the Honda Civic WTCCs ran consistently but a lap eight puncture forced the Yokohama Trophy leader into early retirement.

By the flag Tarquini placed a respectable 6th and further extended his points; Monteiro an impressive 8th having progressed over half of the field and Honda Racing Team Sweden’s Argentinian entrant, Nestor Girolami claimed an excellent 10th place points-scoring finish in his first WTCC race.

The second race proved eventful from the go. Once again the Honda Civics demonstrated their faultless starts. Tarquini emerged from the first corner drama ahead, taking the lead for the ensuing laps before Sebastien Loeb made his pass. Despite fiercely defensive driving from Tarquini, Lopez and Muller would get by. The highest-placed Honda finished 4th.

Michelisz and Monteiro ran line astern for much of the race. Although some contact between them on the eighth lap, both drivers continued to once again salvage points in 8th and 9th.

Nestor Girolami finished 11th following his impressive start save, in which his Civic was seen taking to the grass in order to avoid contact with the slower starting Ma, losing valuable time in the process.

Gabriele Tarquini (6th/4th): “I’m not happy with starting 2nd and finishing 4th. I was fighting for the podium but it was very difficult to stay in front. I fought with Loeb a little bit but I couldn’t save my position for long. Then I felt the front downforce was disturbed quite a lot when I was following Yvan so needed some clear air. But the car was very balanced and I enjoyed the race because I was pushing as hard as possible and I could feel the car responding.”

Tiago Monteiro (8th/9th): “Considering qualifying I am very happy with the results today. It’s difficult to read the pace because I was always fighting with someone. I’m happy with what we achieved today; it was a good comeback from 17th and two races finished in the points is something to be pleased with.”

Norbert Michelisz (DNF/8th): “It has been a tough weekend for us, not helped by a puncture in the first race. We need to review the data and understand what we can do for the next race.”

Alessandro Mariani, Managing Director JAS Motorsport: “In the main I am happy. Gabriele had good race pace, particularly in race two. I am pretty happy with what we achieved from our positions – the team has worked hard all weekend.”

Daisuke Horiuchi, Large Project Leader for WTCC Development at Honda R&D: “It’s been a very hard weekend. I hoped Gabriele could hold the lead in race two but the weight really does affect our car. We know we have to improve the power although this weekend we adjusted the boost control and the drivers commented there is improved engine response.”