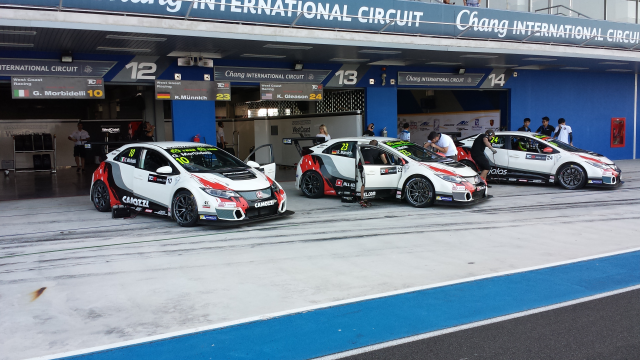 Long hours at the design board and in the engineering bay have paid dividends for JAS Motorsport, as the latest evolution "Step 2" of the already successful Honda Civic TCR proves competitive out-of-the-box.

Lead driver in the TCR International Series Gianni Morbidelli served notice of the potential with a clear pole position for the latest round of that series in Thailand.

Meanwhile, additional proof of the potency of the evolution was to be found not far away in China, at the Yancheng round of the China Touring Car Championship. Martin Xie secured pole position there in the evolution version of the JAS Motorsport-prepared Civic, ahead of the Sunday race.

As the team prepared for the TCR race in Thailand, further adjustments were being made to the car, in order to cater to the specific requirements of the track. The team has one goal in capturing a lights to flag victory on Sunday.

Morbidelli's teammate Kevin Gleason was also highly competitive during qualifying and lines up on the second row of the grid, in third place.