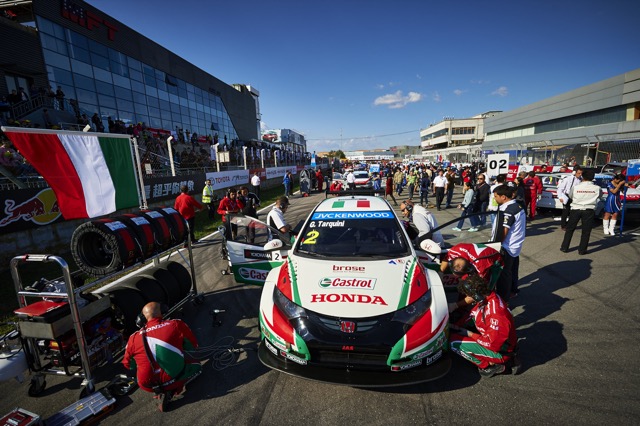 In Beijing this weekend the Civic WTCC drivers had much to be pleased with. They set the quickest times in free practice sessions, were first in the first qualifying session and claimed a second place on the starting grid. It was a performance that showed just how far the car had come over the summer months and that the team’s hard work to close the gap with the competition is beginning to pay off.

But whilst the signs were good, frustratingly this promising performance was not capitalised on the short Goldenport Park Circuit; a combination of race incidents and simple bad luck means the drivers of the Castrol Honda World Touring Car Team will now have to wait until Shanghai to show what the car is truly capable of.

“The race incidents and the bad luck didn’t help us, but there were some other things that completely ruined our strategy too. I am thinking of Tiago who was at the top of the rankings until Q2 and then completely fell back down the order, or Gabriele who couldn’t capitalise on his second place on the grid. We really have to look at what went wrong in those two cases, because without those we could have got a great result and confirmed the competitiveness of the Civic WTCC. So despite the results, I have a really strong feeling that we are working in the right direction.” explains Alessandro Mariani, Team Director of J.A.S. Motorsport.

Echoing Mariani’s thoughts, Daisuke Horiuchi, Large Project Leader for WTCC development for Honda R & D, said. “The results this weekend do not reflect the performances of the Civic WTCC. Beijing clearly was a turning point in the season though. After multiple test sessions it is clear that we have taken a big step forward performance wise. Our target is to continue working in Shanghai, and to be fully ready for the meeting in Suzuka.”

Immediately after the race in Beijing the WTCC caravan started its 1.100 km long journey towards its next stop, Shanghai. Next weekend will be the third WTCC meeting at the 5,4 km Shanghai International Circuit and it was on this very fast track last year that Honda wrote some of its nicest pages in its WTCC history – a 1-2-3 finish. Tiago Monteiro took his first win at the wheel of the Civic WTCC and was joined on the podium by Honda-teammates Gabriele Tarquini and Norbert Michelisz!

“It was a beautiful win”, recalls the Portuguese driver, who in 2005 and 2006 participated in the Chinese Grand Prix. “Last year I started Race 2 from pole, took the lead in Turn 1 and then ten laps later I crossed the line in first position. It will always be a nice memory for Honda, the team, my Honda-teammates and myself.”

It is only logical then that the Honda Civic WTCC of Gabriele Tarquini, Tiago Monteiro and privateers Norbert Michelisz and Mehdi Bennani will attract a lot of attention in Shanghai. Especially since the gap with the competition has been closed so considerably.

“Shanghai is a circuit with quick corners and serious braking zones”, explains Gabriele Tarquini. “And since our chassis, engine and set-up are all okay – I only barely missed out on pole last weekend – I think we should be able to confirm our progress. We will give our all to perform well and I am really eager to give the Civic WTCC its first win too!”