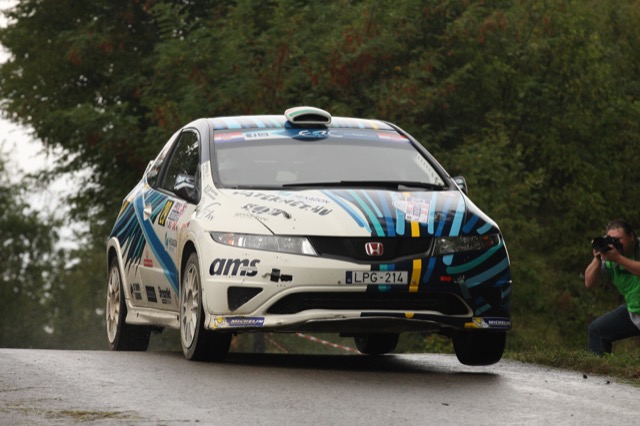 Civic Type R R3 driver Zoltan Bessenyey and co-driver Yulianna Nyirfas were celebrating this weekend after clinching the 2013 European Rally Championship 2WD driver and co-driver titles. Despite not appearing in the Rally Sanremo, Kornél Lukács, their closest rival in the Championship failed to secure the necessary points to keep the 2WD title race alive, handing the crown to the Hungarian duo*.

The 2013 ERC 2WD driver and co-driver titles add to Honda’s growing success in international rallying. In 2011 Honda won the 2WD Manufacturer’s Cup in the Intercontinental Rally Challenge, the precursor of the ERC.

This year’s campaign was full of memorable performances. Battling through fog, mud, wet gravel and rain, the Hungarian pair came 1st in the SATA Rallye Açores and delivered another strong result in the Rally Croatia, coming 2nd.  It was a strong showing from the Honda Civic Type R too, with Bessenyey-Nyirfas, the Eurosol Racing Team and J.A.S. Motorsport, who operates Honda Racing Customer Support, proving the reliability of the car with seven out of seven starts and finishes.

The title was won against stiff competition in the 2WD Championship, including Austrians Hannes Danzinger and Hermann Neubauer, Italian Elwis Chentre and Frenchman Stéphane Lefebvre. And at the start of the second half of this year’s ERC, fellow Hungarian Kornél Lukács was a particular threat to Zoltan.

“Kornél constantly put pressure on me.” says Zoltan. “In some rallies I preferred to drive cautiously because that was the only option to reach the finish line, such as on the demanding Romanian gravel roads. But that’s where Kornél made a mistake. For example while we obtained a 3rd place in the Barum Rally, he slipped off the track. The turning point though was the Rally of Poland, where neither Lukács nor Lefebvre scored points. Then there was Croatia. I stayed ahead of Lukács throughout the two day battle and the valuable points we secured really did help us move us ahead in the title race.”

The European Rally Championship ends on November 7th and 8th with the Rallye du Valais in Martigny, Switzerland.

(*) Subject to confirmation of the results by the FIA