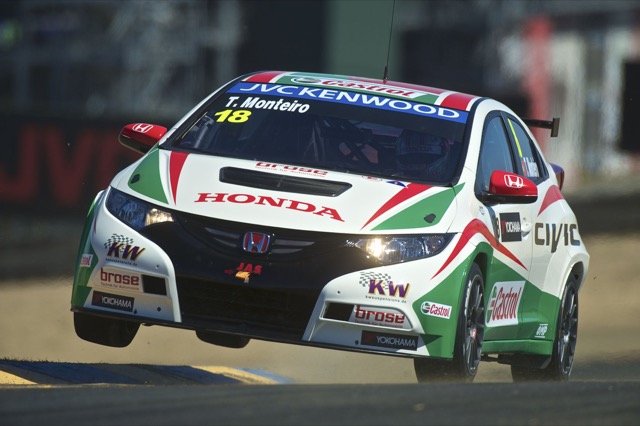 The chips are down for two dramatic WTCC races tomorrow following the frantic final 10 minutes of official qualifying this afternoon and three Honda Civics are strategically placed on the final time-sheet with podium opportunities. Tiago Monteiro drove his Castrol Honda into third fastest time overall which means he starts Race 1 on the second row of the grid and is determined to take the top step of the podium.

Gabriele Tarquini secured 10th place with his final flying lap which means he will start on pole position for Race 2 as the top ten places are reversed for the second race. The Italian is eager to score his second race win of the year having taken the chequered flag at the Slovakia Ring event early in the season. He will start Race 2 alongside Michel Nykjaer who is holding second place in the Drivers’ Championship, just 14 points ahead of Tarquini so this is another highly competitive element in tomorrow’s racing.

Norbert Michelisz finished the session in 7th place but having had the engine changed prior to the meeting he is relegated to the final row of the grid for Race 1 and was therefore aiming for a position near the 10th place to focus on Race 2. This worked quite well and he will start Race 2 on the second row and plans to follow Tarquini towards the podium. It is going to be a highly charged afternoon here in California!

The ninth round of this year’s FIA World Touring Car Championship is running at Sonoma Raceway just north of San Francisco, California, returning to this undulating 4km circuit for the second consecutive year. Sonoma is probably one of the most attractive settings for a race circuit anywhere in the world, the track being close to the hillside vineyards of Northern California. There is a 50-metre elevation change between the highest point at Turn 3 and the lowest sector at Turn 10 and the circuit has a great series of fast, flowing corners, tight chicanes and heavy braking zones.

Tarquini arrived at Sonoma holding third place overall in the Drivers’ World Championship, just 14 points behind second position and Honda maintains a useful lead in the Manufacturers World Championship, so points gained here in California will have a vital bearing on the season’s results.

The weekend started well for the Castrol Honda World Touring Car Team with Tiago Monteiro setting fastest time in the Friday test session. Gabriele Tarquini put the Number 3 Civic into fourth place in the first of Saturday’s free practice sessions and in the second session Norbert Michelisz held the top spot in his Zengo Motorsport Honda until just 7 minutes from the close. To gather as much track data as possible all three Civics used alternative set-ups in the free practice sessions. Tarquini took another fourth position in the second practice and whilst Monteiro was lower down the time-sheets he was confident for qualifying with fresh tyres saved from the practice sessions. It certainly proved to be a battle royal in the official qualifying runs in the afternoon.

A very confident Monteiro is delighted with his Honda: “I really am happy with the balance of the Civic today, I was able to go on full attack right from the start of qualifying. During the testing we got the chassis just right and I saved new tyres for the qualifying. Even though the track temperature was around 50 degrees C the Civic is gentle on the tyres and this will help me as the race nears the finish. I know I can pressure the others from the start.”

Gabriele made a change of strategy during the qualifying having used two sets of tyres quickly. “I could see that the time was going to be very tight for me to get near pole so I changed my plan and aimed for 10th so that I would be at the front for Race 2. It worked out perfectly for me and as the Honda preserves the tyres so well I think we should have a great chance for victory tomorrow.”

Another man clearly pleased with today’s results is Daisuke Horiuchi, Large Project Leader for WTCC development from Honda R & D. “All three engines ran perfectly today and we are very competitive. We decided to change Norbert’s engine after checking the data after Argentina and seeing that there were some changes. He has run that engine since the start of the season in Monza and we must remember that we are really still in the development stage in our first year and we want to monitor the longevity of all the components. This will help us with our focus on the 2014 specifications. I’m sorry for Norbi but I know he will put in hard drive tomorrow for sure.”