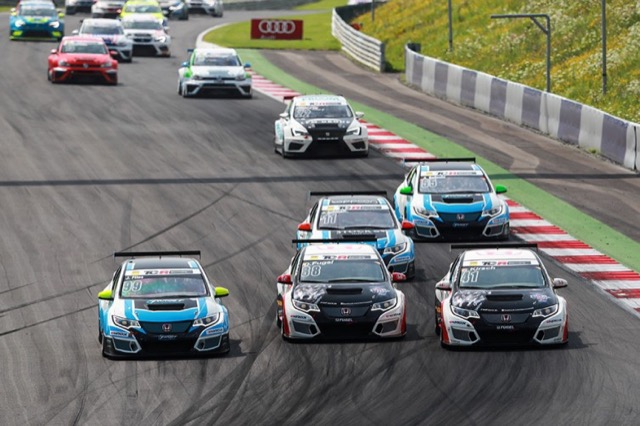 Files and Kirsch Win Both TCR Germany Races in Austria

JAS-Prepared Civics Fill the Podium in Race One

JAS-prepared Civics dominated the fourth event of the TCR Germany series at the Red Bull Ring in Austria. Josh Files (Target Competition) and Steve Kirsch (ADAC Sachsen) took a victory each in the two races.

In race one, Files had an excellent start from seventh on the grid and took the lead ahead of pole sitter Kirsch. Andrea Belicchi and Jürgen Schmarl in two other JAS-prepared Civics followed closely behind. Kirsch unfortunately retired, but Belicchi and Schmarl maintained the Honda force at the front. In a hectic finish caused by a safety car deployment, Dominik Fugel's JAS-built ADAC Sachsen Civic took third from Schmarl.

There was more action and drama in the second race, but Kirsch came through to score his first victory.

The series resumes again on August 6/7 at the Nürburgring.