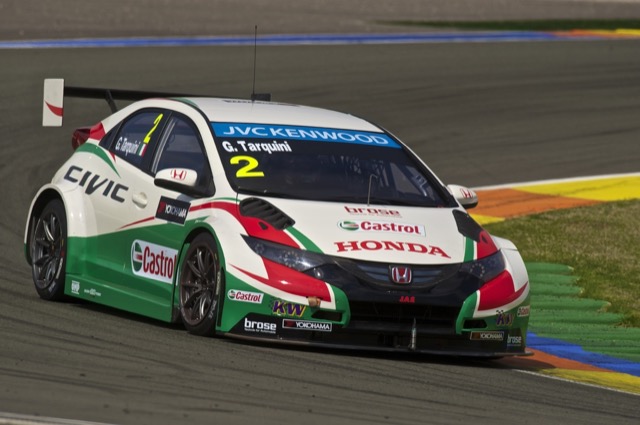 Four Civics WTCC Ready For Battle In The Streets of Marrakech!

This weekend it will be almost a year to the day that the Castrol Honda World Touring Car Team made its full debut in the FIA World Touring Car Championship. Last year was an inaugural full season to remember for the fans too. Honda clinched the Manufacturer’s title and Gabriele Tarquini’s consistently strong performance secured him second place in the Drivers’ Championship.

Honda’s second full season in the Championship starts this Saturday at the Moroccan Moulay El Hassan Circuit of Marrakech. However, with the introduction of brand new technical regulations, this year represents a whole new challenge for the squad and the engineers at Honda R&D and J.A.S. Motorsport. It’s also created an all new Civic WTCC. The Civic WTCC 2014 is a more impressive, muscular car than the 2013 model and hides a powerful 380 bhp 1.6 litre 4 cylinder direct injection turbo-charged petrol engine under the hood.

For the opening round of the 2014 Championship the Castrol Honda World Touring Car Team is entering two Civics; one for Italian Gabriele Tarquini – the 2009 FIA WTCC Champion - and one for Portuguese driver Tiago Monteiro. Both drivers have a wealth of experience to draw upon and are well aware of the challenges they will encounter in the North African street race.

“Two long straights, fast and dangerous chicanes, tight hairpins, walls bordering the circuit and high kerbstones… these are the elements that make this street race an enormous challenge”, says Gabriele Tarquini, who finished second in Marrakech last year. “But I know the 4,5 km long track very well, which is a major advantage. So after a long winter of hard work, new rules and completely new cars, the time for action has come. Soon we will know where we stand and what ambitions we can nourish.”

Marrakech is the first of four FIA WTCC rounds that come in quick succession over the next five weeks. One week after Morocco, it’s straight off to the Paul Ricard Circuit for the French round of the Championship.

“Because of the busy schedule coming up, we can only hope that our cars don’t suffer too much damage in Marrakech”, explains Tiago Monteiro. “We have to be very careful not to get involved in any incidents, which isn’t easy on the quick street circuit. It will be a very interesting first test against the new cars and new drivers though. For the Moroccan fans it will also be a fantastic event and the look of the new cars in the FIA WTCC will only add to the excitement already provided by this amazing championship.”

In addition to its works team, Honda will also be represented by two private teams: Zengo Motorsport, which last year scored an emphatic win at Suzuka with Hungarian driver Norbert Michelisz; and the Italian Proteam Racing, which joins the Honda family for the first time this year with Moroccan Mehdi Bennani.

Morocco has a rich and proud heritage in motorsport. Up until the 1950s it was home to Formula 1 (the last round was held in 1958 and won by Sir Stirling Moss in his Vanwall) and in the seventies the Rally of Morocco was part of the World Rally Championship (1973, 1975 and 1976).

The first Moroccan driver on the international racing scene was Max Cohen-Olivar, who entered the 1971 Le Mans 24 Hour race and went on to become a specialist in GT racing. But it was a long wait for Mehdi Bennani; the next home grown racing star for the passionate Moroccan motorsport fans to embrace.

Bennani made his World Touring Car Championship debut in 2009 when Morocco first joined the FIA WTCC calendar (it remains the only country on the African continent to host a round in the Championship).  He immediately won the Independents’ Trophy and his success inspired a new generation of Moroccan drivers, including El Marnissi and Ismaïl Sbaï. 2014 is his fifth season in the Championship, but the first year behind the wheel of a Honda Civic WTCC.

“There’s no such thing as a home advantage sadly”, says a smiling Bennani, who last year won four rounds of the Yokohama Drivers’ Trophy and finished fourth in classification. “The Marrakech street circuit was created especially for the FIA WTCC. And even though the Moroccan Championship is held on the same streets, they are rarely longer than 1,5 km. So unfortunately my knowledge of this weekend’s circuit is no better than any other driver! Furthermore, I will need some time to get to know the new Civic. After several years of experience with rear-wheel drive cars I now have to adapt my driving style to a very powerful front-wheel drive car. I’m sure it won’t take too long though and perhaps after a couple of races I’ll be able to fight amongst the frontrunners. In my first race with the Civic WTCC, I hope I can thank my fans in Marrakech for their support with a top-10 finish.”

In contrast to the non-street circuits on the WTCC calendar, which feature twenty minute qualifying sessions, Q1 on Saturday April 12th will last a full half hour. The twelve quickest drivers of Q1 then move forward towards Q2, which lasts 15 minutes (ten minutes on other tracks). The five quickest cars then go through to Q3, in which every driver gets one timed flying lap.