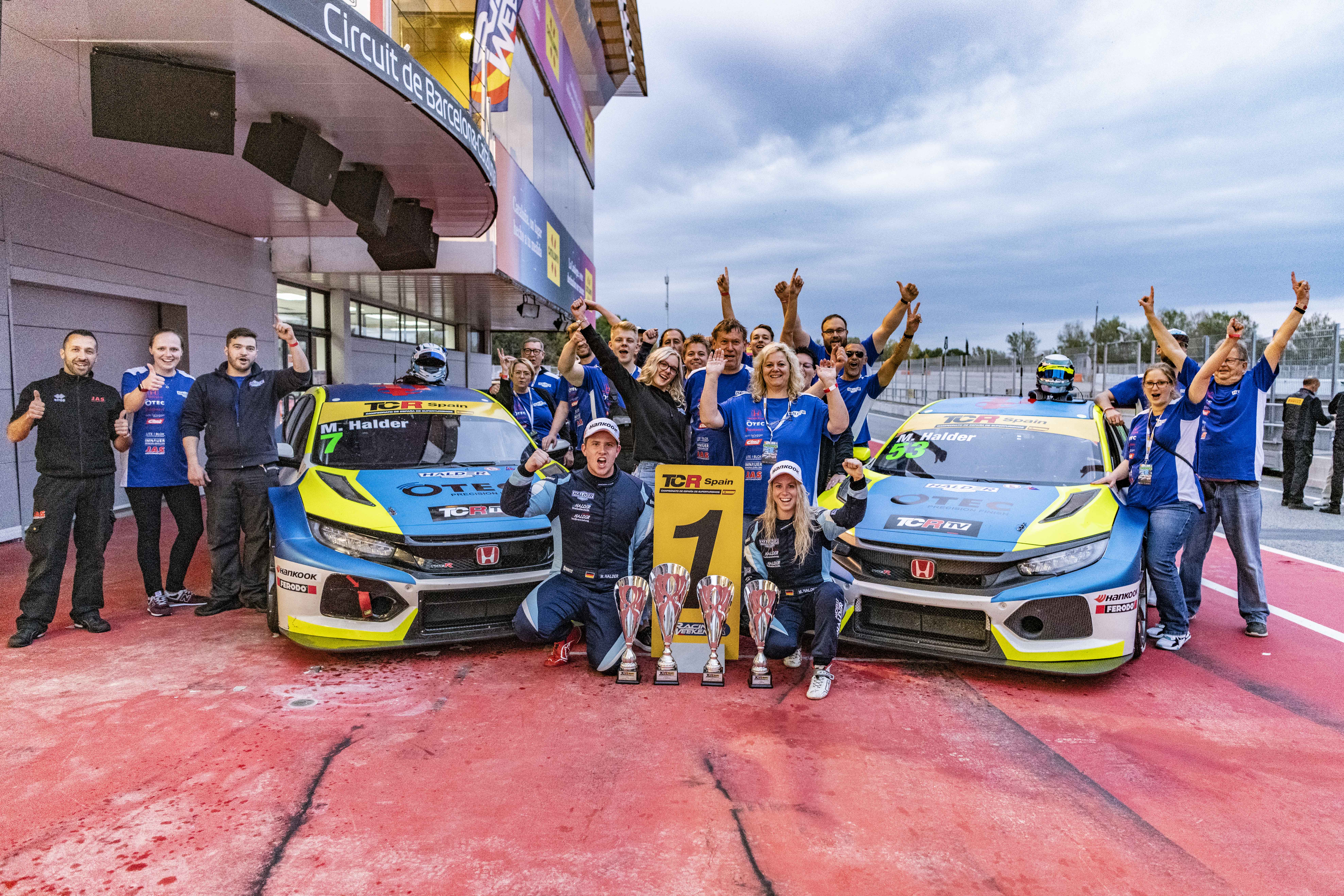 Halder Motorsport capped off an incredible season with the Honda Civic Type R TCR as they won four championships last weekend in Barcelona.

There were also wins in South America and Asia as the successes continued to mount for the JAS Motorsport-built car.

The dominant driver of the season, Mike Halder only needed to finish the opening race at the Circuit de Catalunya to be assured of the title. This he did with second place in Saturday’s opener with sister Michelle winning the Junior Trophy class in third overall.

A repeat result by Mike on Sunday morning not only secured the Teams’ Championship for the family-run operation, but also clinched the TCR Iberico Drivers’ and Teams’ crowns as well.

The Civic Type R TCR has now won 47 major championship titles; 32 of which have come with the current FK7-based model, which was debuted in 2018.

In moving over to allow Michelle to pass him for the final podium spot on the last lap of Race Three, Mike ensured his sister finished third in the Championship as well as second in both the Junior and Female Trophies.

W2 Pro GP drivers Raphael Reis and Nestor Girolami combined to score their first series wins in the second ‘endurance’ race of the season at Buenos Aires, Argentina on a day when the Civic Type R TCR became the first car to lock out the podium in the series.

Girolami - who started third - passed the similar car of Squadra Martino’s polesitter Matias Milla for the lead on the third lap and he and his co-driver pulled away to what was a six-second advantage by the finish.

Milla and Colo Rosso were second with team-mates Manuel Sapag and Esteban Guerrieri third while W2’s Pepe Oriola maintained his series lead as he took over from Martin Ryba at the stops and climbed from seventh to fifth.

W2 extended their lead at the top of the Teams’ points while Martino - for whom Facu Marques and Fabio Casagrande were 10th - remain third. Casagrande remains second in the Trophy category after he and Marques finished third in class in Buenos Aires.

Team Noah marked their first race since being crowned ST-TCR champions with a dominant two-lap victory at Okayama to complete an unbeaten season for the Civic Type R TCR.

Shigetomo Shimono - the fastest driver in qualifying - and Yoshikazu Sobu qualified their car second, but were quickly to the head of the field in Sunday’s three-hour race, in which they were joined by co-drivers Yuji Kiyotaki and Toshiro Tsukada.

Such was the dominance of the Civic in ST-TCR that Racer M&K Racing, who were not present at Okayama, completed a one-two finish in the points for the model.

Ryan Eversley and Tyler Stone gave Atlanta Speedwerks a sensational end to the season at Road Atlanta as they charged from 15th on the grid to a second-place finish amid crazy final-lap scenes.

Stone qualified the Civic and rose to 12th place by the mid-race driver change, which took place under full-course-yellow conditions typical of an incident-filled two-hour race.

A superb pitstop elevated Eversley - who took over at the 50-minute mark - to ninth and he continued to climb to fourth by the final lap, but the best was to come as he scythed past two battling rivals at the last corner of the last lap to claim a spot on the podium.

Eversley - the only one of the Atlanta Speedwerks drivers to start every race this year - finished fourth in the Drivers’ points with Honda third in the Manufacturers’ Championship.

VGMC Racing’s Victor Gonzalez Jr had brought his car from 12th on the grid to eighth by the driver changes, and co-driver Karl Wittmer continued the progress as he climbed to seventh.

But his season ended with 45 minutes of the race to go as he lost a front wheel and exited as a result.

Rene Munnich returned to circuit racing after more than two years away in fine style as he stormed to overall pole position for the season-opener at Dubai Autodrome.

The ALL-INKL.COM Munnich Motorsport team owner was unfortunate to retire from the lead with a technical issue, something that meant he would start Race Two from the back of the 22-car grid.

He carved through the field, despite needing to pass a number of GT cars on the way and finished second overall. 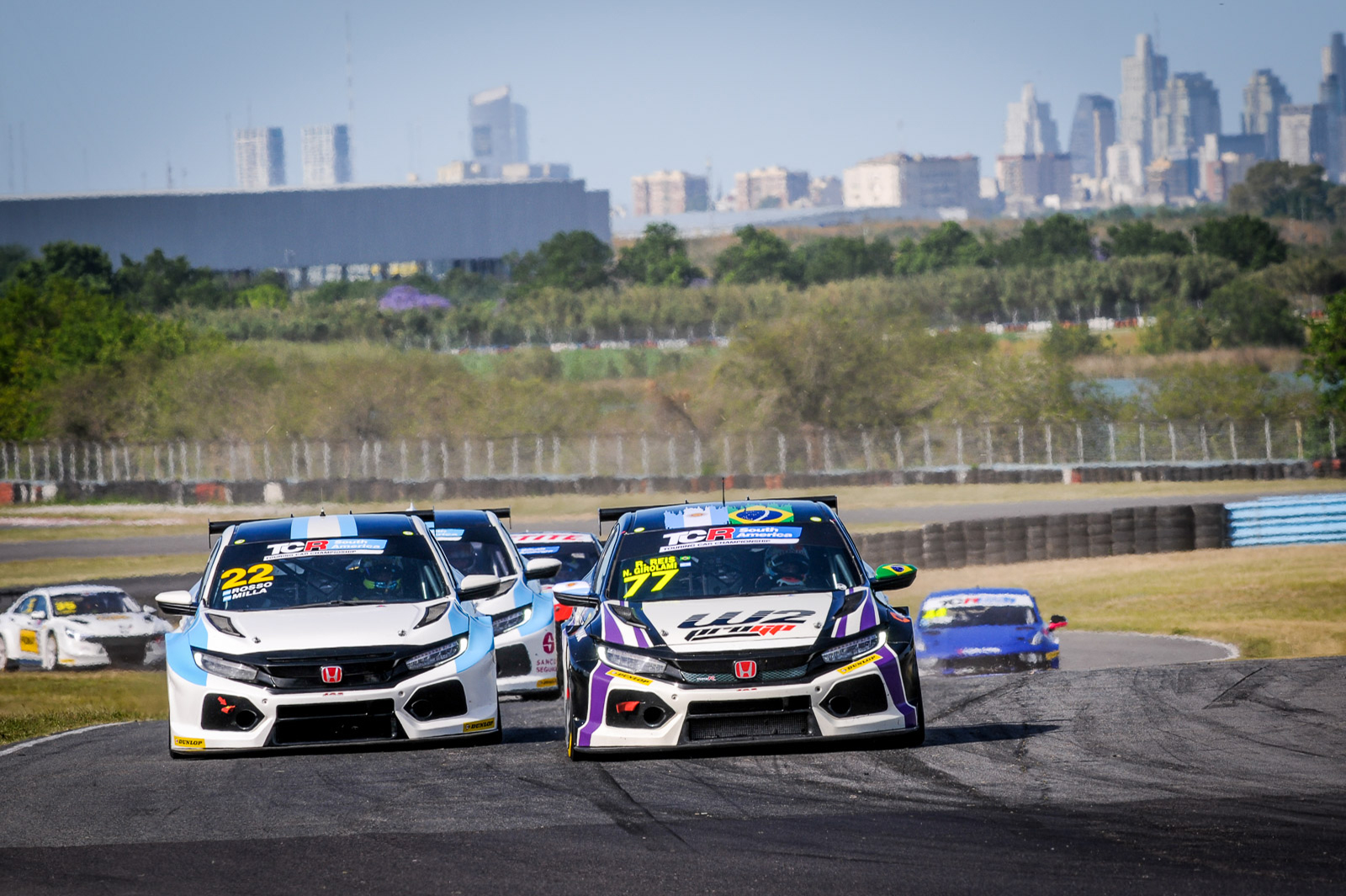