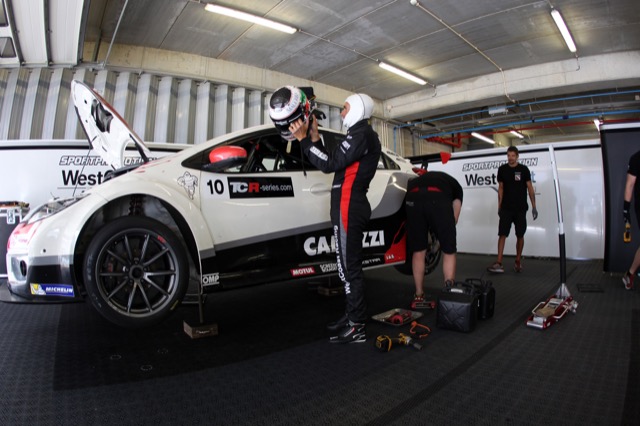 American Kevin Gleason is strategically placed on pole position in the second of two points scoring races for the fledgling TCR international series on Sunday. Driving the JAS Honda Civic TCR entered by West Coast Racing, Gleason will head a trio of SEATs as the lights turn green, for thirteen laps around the Autodromo Internacional Algarve.

Teammate Gianni Morbidelli is on the third row of the grid for both the first and second races. He will be doing his utmost to keep ahead of arch rival Stefano Comini, who is placed just 15 points ahead in the overall championship standings and who starts immediately behind the Italian on the tarmac.

The team continues to adjust the specification of the cars in order to cope with the punishing ballast they are required to carry as part of the "balance of performance" regulations.

Nevertheless, both Gleason and Morbidelli will be hoping for a repeat of the pace shown in free practice here on Friday. Held under hot and sunny conditions at this modern and advanced race track near Portimao, the car in the hands of Morbidelli was only a fraction of a second off the best time of the day.

Two races are scheduled for this championship doubleheader on Sunday, beginning at 12:35 PM local time.