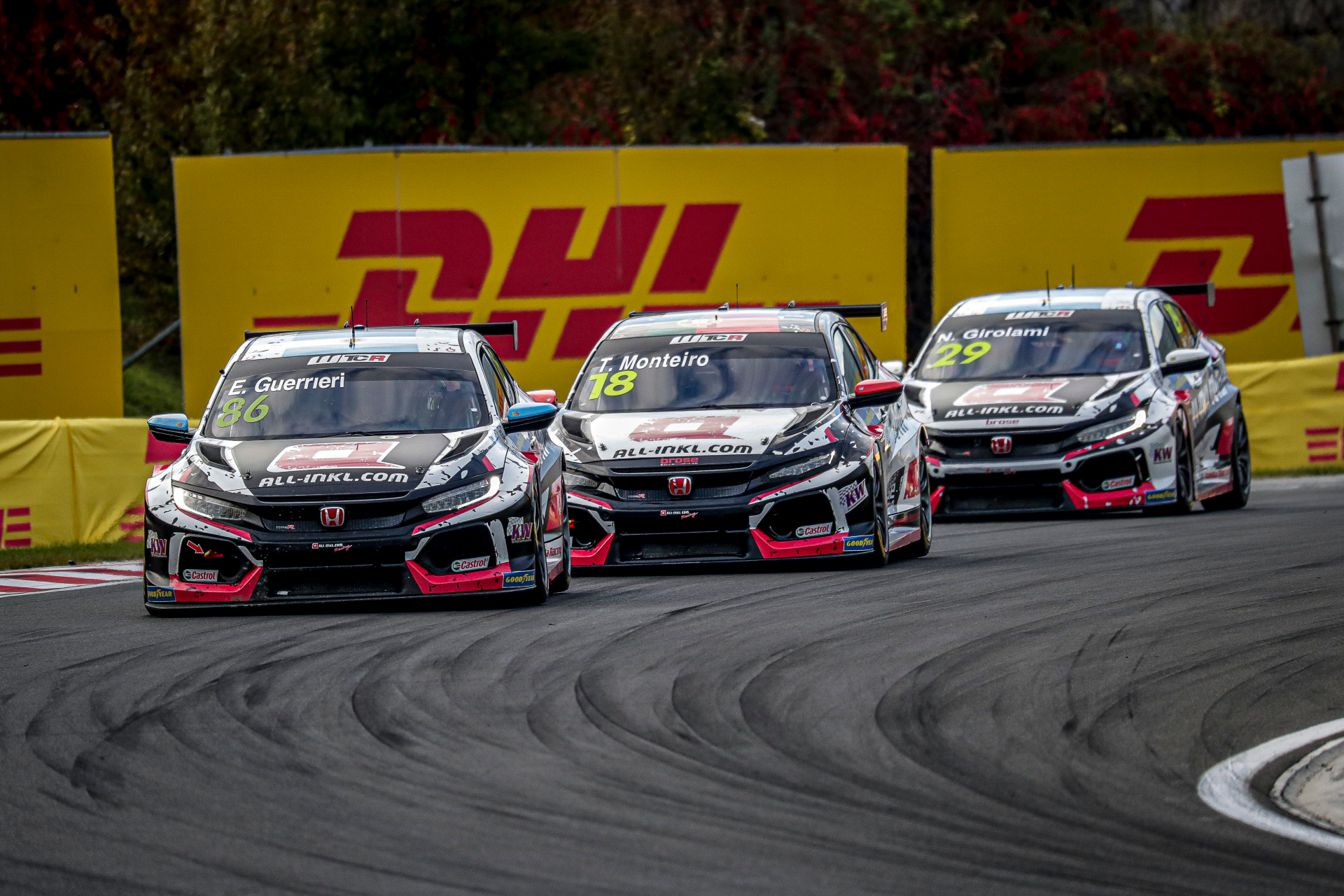 An astonishing Esteban Guerrieri-led podium lockout in the WTCR – FIA World Touring Car Cup was the highlight of another strong weekend for Honda Civic Type R TCR customer teams across the globe.

Guerrieri was the star of the Hungaroring weekend as he took a double pole-position in wet conditions and then won two dry races to storm up to second place in the WTCR points standings.

The Argentinian’s ninth WTCR victory – all achieved in JAS Motorsport-built Hondas – means he alone now holds the record for the most wins ever scored in the series.

ALL-INKL.DE’s Tiago Monteiro was second in Race Three while team-mate Attila Tassi, who had qualified second in a 1-2-3-4 result on Saturday, scored a best result of fifth in Race One.

Civic drivers won the Junior Cup in both races at the Red Bull Ring; Honda ADAC Sachsen’s Marcel Fugel increasing his lead in the standings with a Race One victory over the older FK2 machine of Albert Legutko, and the Legutko Racing driver reversing the spots on Sunday.

Fugel’s brother Dominik started Saturday’s race from the back of the grid due to a post-practice engine change, but carved his way up to fifth before the team-mate of his chief title rival drove into him at Turn 2 and broke his suspension.

Ultra-fast work by the Fugel Sport team – who run the Honda ADAC Sachsen cars – got him back out to finish 14th and, crucially, score points for completing more than 75 per cent of the race.

The elder Fugel added third place on Sunday; a result that keeps him second in the Drivers’ points with Marcel fifth overall.

Atlanta Speedwerks marked their series comeback after nine months away with a staggering TCR pole position for Todd Lamb and a podium finish for the team boss and his co-driver Brian Henderson.

Overcoming an early drive-through penalty for a post-qualifying tyre change, Lamb and Henderson climbed from last to finish third in the two-hour race with Cliff Brown and Bryan Ortiz eighth in the sister car.

Taylor Hagler and Ryan Eversley were on course to win in their LAP Motorsports-run LA Honda World Racing Civic thanks to searing pace and clever strategy, but an agonisingly timed full-course caution wiped out their advantage before their second pitstop.

Dropped to eighth, yet more safety-car periods stopped Eversley from climbing higher than fifth during the final 40 minutes. The sister car of Mat Pombo and Mike LaMarra suffered a heavy race-ending accident when a tyre failed with 45 minutes to go.

Having led the Class B standings since the opening weekend of the season Jordan Michels suffered heartbreak at the season finale at Timaru as a holed radiator cost him back-to-back titles.

Scoring his third straight pole position in his Evolution Motorsport-run Team Williams Racing Civic, Michels led early on, but the issue forced a long pitstop early in the one-hour race and retirement with 20 minutes to go.

He did, however, clinch a spot at the New Zealand Endurance Championship, at which he will again attempt to defend the 2019 title he won in his Honda.

A Civic Type R TCR appeared in the series for the first time in 2020 courtesy of Maximum Motorsport and championship debutant Jeff Alden.

Alden moved through the field from a pitlane start in Race One to finish sixth, but did not finish either of Sunday’s two races at the Donington Park season finale.

Mads Fischer, JAS Motorsport TCR Project Leader, said: “This is a fantastic weekend for everyone involved in the Honda Civic Type R TCR project and of course for the Munnich Motorsport teams in the WTCR. The foundations for these results - particularly the fantastic podium lockout in race three - were set in qualifying, but there was still plenty to do on raceday and we have to give credit to the drivers and the crews, who also put in some real hard work to get the cars out there. We are very proud of the achievements, which are the result of some amazing teamwork from everybody involved.” 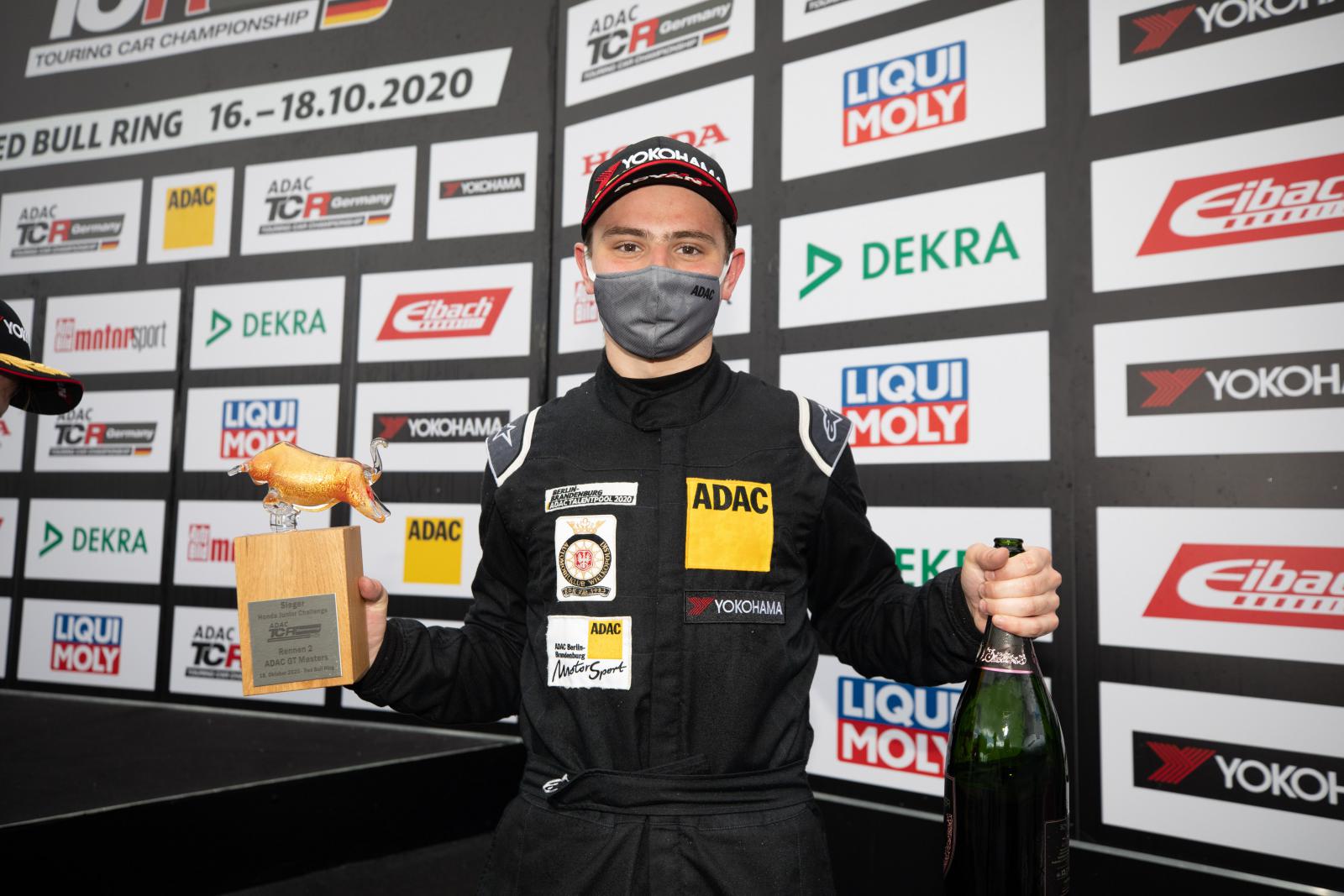