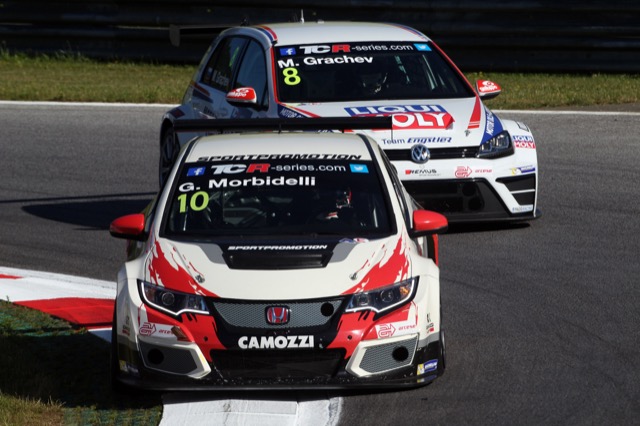 Morbidelli and Gleason Block Out Front Row for Race 1

To paraphrase lead driver Gianni Morbidelli, things were indeed starting to look much better for the JAS Motorsport prepared Honda Civic TCR drivers at the picturesque Red Bull Ring, with a front row lockout during qualifying.

Following an admittedly disappointing last outing, the West Coast Racing team had arrived in Austria looking for significant improvements. Morbidelli, meanwhile was on a mission to retake the lead in the TCR International Series. On the face of it, so far, so good.

Early indications were good with competitive times in free practice. “I think now we are heading in the right direction,” confirmed Gianni. This was to prove to be something of an understatement, as the Italian stormed to pole position in a frantic qualifying session. He was the only competitor to break the 1 minute 40 mark. His teammate, the American Kevin Gleason wasn’t too far behind either, and blocked out all the rest. This was to be Morbidelli’s third time on pole position so far this season and another front row lockout for the team.

Third team driver Igor Skuz finds himself starting in 16th place on the grid for the first race, due to a penalty enforcement dating back to the second race of the season.

There are two races on Sunday, with the first starting at the early hour of 8.25 AM local time and the second at 11.40. Each race will have a distance of 14 laps.

Said Morbidelli - “It was an unexpected pole and I am very happy, because I really love this track and its facilities. I was really impressed by the three quick laps I did, it shows we came a long way since this morning’s first free practice. We changed a lot of things in the set-up and made some final adjustments between Q1 and Q2. The track conditions have been changing constantly during the day, given also the rising temperatures and the different tyre compounds left by the other series. We’ll see how things will go tomorrow. The start will be key and I hope we can improve from recent races. My objective is clear: to retrieve the championship leadership, so I’m happy to have already taken the five points of the pole.”

Gleason felt that there was more to come – “I think I still had a little bit in my car, but there was no way for me to match Gianni’s time. Still, I am very happy because the team did a great job improving the set-up throughout the day and I did well also in learning the circuit, which is quite technical. I drove here on new tyres for the first time in Q1, so the results is really not bad!”