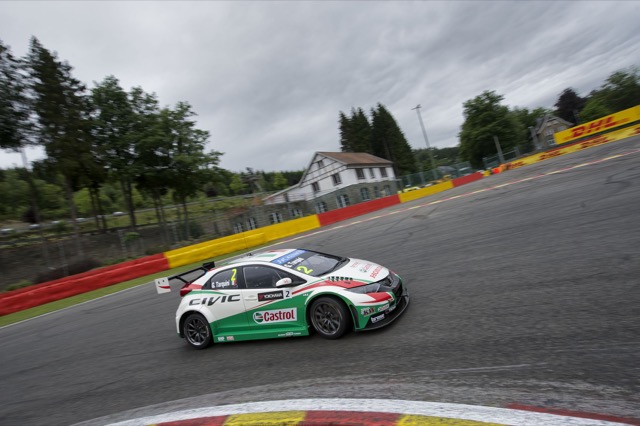 The Honda Civic of Gabriele Tarquini battled through qualifying into the Q3 single car shoot-out to set the fifth fastest time for a third row start position for Race 1 at the FIA World Touring Car Championship here at Spa Francorchamps in Belgium. The experienced Italian pushed his Castrol Honda Racing machine to his fastest time of the day over the 7 kilometres of the famous Spa circuit. Team-mate Tiago Monteiro was next fastest followed by the Civic of Norbert Michelisz in 7th position and the fourth Honda Civic of Mehdi Bennani in 9th place.

For Tiago his 6th place will be converted to 10th for Race 1 as the popular Portuguese is carrying a penalty for the previous race in Moscow that will demote him 4 places on the grid for Race 1.

“We tried to work out a strategy to negate the penalty but it didn’t work exactly so I start 10th in Race 1 but on the 3rd row for Race 2 alongside Gabriele. My aim is to try and gain some points towards my Championship total,” said Tiago at the end of qualifying.

For Gabriele the challenge of the Spa circuit is always a joy.

“After Moscow I was really confident although for this circuit you do need top speed for the straights. We worked on settings and performance in testing and free practice and I was pleased to get into the shoot-out and 5th place is the best we could have achieved I think. If we can make another quick start for Race 1 we can try and hold the challenge.”

One man who is experiencing Spa for the very first time is Norbert Michelisz. The young Hungarian star has not raced here before but has been looking forward to the experience since the schedule was announced at the start of the year.

“It is a fantastic experience to drive here, it is exciting and at the same time very difficult to get everything right on such a long lap. I have driven many laps of Spa on the simulator but it is nothing like the real thing on track with the rise and falls. It is also hard to find the apex correctly but the super-fast corners are beautiful. My aim was to get into the top ten so 7th on the grid is ok for my first time. That puts me on the second row for Race 2 and my target is to score some points on Sunday.”

Following his podium result in Moscow Mehdi Bennani is looking forward to Race 2 where once again he starts from the front row.

“For me tomorrow it is a good starting position and the Honda makes a good start so if I arrive at the first corner first I will try to hold my position. I am still learning front wheel drive techniques so each race adds to my experience.”

“We have a new turbo boost control mapping for Spa to maximise the boost available. This circuit is at the same altitude as Austria so we have to take that into account.”

“This has been a very busy first half of the season for everybody in WTCC,” says Alessandro Mariani, Managing Director of J.A.S. Motorsport. “This not a good track for us but we are working to improve many elements of the Civic. We have a major test program to run to evaluate many components during the summer before the next part of the season outside Europe. I am confident we will achieve more performance.”