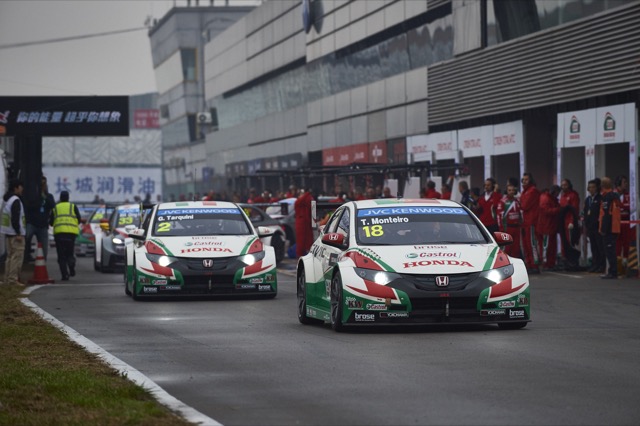 The teams, cars and drivers of the FIA World Touring Car Championship have reconvened after the long summer break at the 2.39kms Goldenport Circuit Park at Beijing for the first of two WTCC events to be held in China on consecutive weekends. After the first three sessions on the track in testing and free practice the Honda Civics are showing a competitive speed against the opposition following a series of important test and development trials during the break. Improvements to the chassis and engine are proving their worth with all four Honda Civics featuring in the top ten during the sessions with the Castrol Honda car of Tiago Monteiro topping the time sheets in each of the three sessions.

For the first visit by WTCC to this Beijing circuit the track was wet and very greasy. Mehdi Bennani set the early top times in his Proteam Racing Civic, consistently lowering his lap times as the circuit dried to hold top spot for most of the session. A 20 minute red flag delay allowed the track surface to improve more and the Moroccan finished the session in 6th place. Norbert Michelisz from Hungary drove his Zengo Motorsport Civic to 13th place whilst concentrating on learning the new circuit and predicting that it would be dry for the race.

Gabriele Tarquini concentrated on chassis set-up during the damp session and eventually brought the number 2 Castrol Honda Civic to 4th fastest overall whilst team-mate Tiago Monteiro found the ideal drying line on the very final lap of the session, setting fastest times on sectors 1 and 2 to post fastest time of 1m15.550s.

“After some set-up changes that really worked for me, I found a good balance to set fastest time. It was tricky in the wet but as the circuit dried I was able to get the best from the Civic,” said the Portuguese at the end of the session.

For the first official Free Practice the track surface was significantly improved with lap times immediately 10 seconds faster that the wet early morning session. Again the Honda Civics proved highly competitive with all four cars in the top 7 positions with Monteiro once more leading the field with Michelisz up to 4th, Tarquini 5th and Bennani 7th.

“The track was nearly completely dry for FP1,” reported Monteiro. “We improve the Civic more and at the end of the session I pushed more to see what times I could really find. I am happy how we are progressing.”

For Free Practice 2 at the end of the day, the track was again damp and the weather cloudy and evening darkness threatening the session. All the drivers were now testing the set-up for tomorrow’s important Qualifying session and again, after another red flag delay, it was Tiago Monteiro who snatched fastest time in FP2 on the very last lap with 1m05.978s. Gabriele Tarquini set 10th fastest time with Norbert Michelisz 13th and Mehdi Bennani 14th. Officials actually ended the track session two minutes early as darkness was making visibility difficult for drivers and marshals. It was so dark that Monteiro missed the red flag an as penalised for his mistake and dropped to 7th although he had set the fastest time on track.

A delighted Monteiro pointed out that conditions were far from ideal. “It was very tricky at all times between some places dry and others wet. It was a question of finding confidence with the track and the car.”

Mehdi Bennani was also pleased with his sessions. “I am happy with my result. I like very much the tricky conditions, and this circuit. My target is to finish in the top ten tomorrow.”

Daisuke Horiuchi, Large Project Leader for WTCC development for Honda R & D was pleased with the evident performance increase after the summer testing. “This good result in free practice proved that we have achieved a big step in the development of the cars.”

For Gabriele Tarquini the development work continues. “There were different choices between Tiago and myself. I had 3 sessions working on the set-up rather than outright performance. I’m happy with the result. Today everyone was driving on mixed conditions, wet and dry. Nobody was driving on a full dry track. But if it is fully dry tomorrow qualifying will be very difficult with a very close fight for places.”

For Alessandro Mariani, Managing Director of J.A.S Motorsport, the result illustrates the work carried out during the summer. “We have certainly improved the car. We are competitive and ended today on top. I’m confident, but tomorrow is another day. I think we will not be far away from the top, we have a very good package now.”

Now everything hinges on the early morning qualifying session which determines the starting grid positions for both 26 lap races on Sunday afternoon.