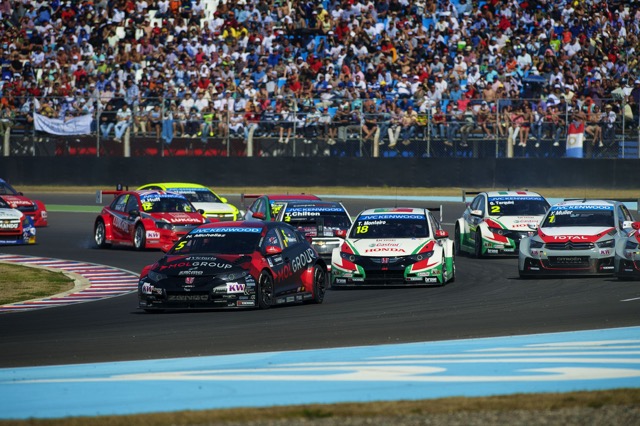 Norbert Michelisz stood proudly on the podium after Race 1 having driven his Zengo Motorsport Honda Civic WTCC to a strong second place overall in the FIA World Touring Car Championship event here at the Autodromo Termas de Rio Hondo in Argentina. The young Hungarian star made a lightning start from the second row of the grid to be alongside the pole position man as they dived for the first corner. Norbi ended lap 1 in second position and drove brilliantly to hold this place to the flag.

Tiago Monteiro also made a great start from row 3 to challenge for 3rd place on the first few corners before settling into fifth place and a race long duel with Tom Chilton but the Portuguese held the position to the end of the race even though a damaged shock absorber made the Civic hard to control. Gabriele Tarquini, his team-mate in the Castrol Honda World Touring Car Team, brought his Civic home in 8th place, one position ahead of Mehdi Bennani in the Proteam Racing Civic.

A delighted Michelisz was naturally pleased with his result.

“I am a happy man, I’m really happy with this result. I made the positions up at the start and was comfortable all race in second position. Only in the last laps did Muller come back at me but the gap was big enough for me to take second place as my best result so far this season and gain more championship points.”

With Honda Civics starting Race 2 in 3rd, 4th, 6th and 7th position the start was going to be dramatic. Bennani, Tarquini and Monteiro all forced their way past Valente who had started on the front row and at the end of lap 1 Bennani held second position followed by Tarquini with Monteiro 4th and Michelisz in heavy traffic in 8th place. By half distance Gabriele was in second place shadowed by Tiago with Bennani displaced as the eventual winner came through the field. Tarquini eventually finished in 4th ahead of Monteiro whilst Michelisz held on to 7th with Bennani finishing in 9th place overall.

“I made a good start in Race 2,” said Gabriele. “Then I had a small battle with Mehdi and then Tiago to hold second for some time. The car was ok, we have improved a lot but the way Lopez and Muller passed me for second and third surprised me. We need to work more in the next weeks before the next race.”

Tiago Monteiro enjoyed Race 2. “I had a good start and then enjoyed the battle with Gabriele but did not want to take any risks for us both trying to pass. I’m still 4th in the drivers’ points table so I must continue to finish each race as strongly as possible.”

For Michelisz Race 2 was all about finishing. “My start was not so good and after that I had contact from two other drivers so I settled for 7th place, some points and a safe finish so the Civic is ready for the next events.”

For Mehdi Bennani the second race was a mixture of emotions: “The start and first few laps were good then I was blocked by Chilton and after that the handling of my car was difficult.”

“After the Valencia test we found new ways to improve the competitiveness of the car and this has been evident during this event. However, as the Team Principal, I am frustrated at not achieving better final results, but we learned a lot using the latest evolutions in racing conditions and that is encouraging for the future.”

Daisuke Horiuchi, Large Project Leader for WTCC development at Honda R & D echoed this sentiment: “I am happy as this weekend the car showed overall improvement in both the chassis and engine; our continuous development of the engine mapping is now paying off and we are closer to the competition compared to Spa.”