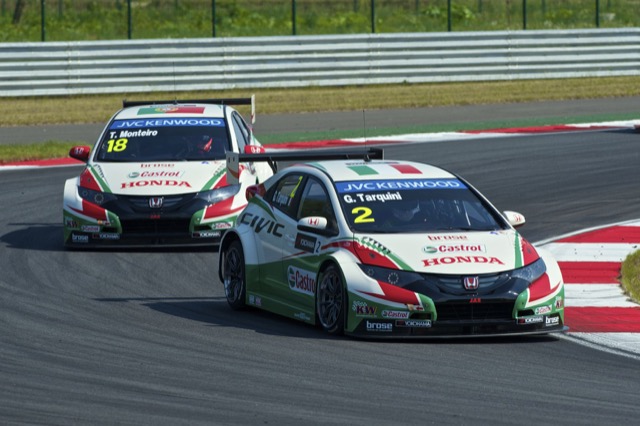 Gabriele Tarquini will start on the front row for Race 1 of the FIA World Touring Car Championship event here at Moscow Raceway with Castrol Honda team-mate Tiago Monteiro right behind on row two. The two Honda Civics battled through the three qualifying sessions here this afternoon, setting the times for others to challenge. In Q1 Tarquini set the fastest time as the only driver to break the 1 minute 39 seconds target with Monteiro second fastest and in Q2 the Italian was third fastest with the Portuguese taking 5th spot to take both Civics through to the single lap shootout. Tiago was first car on track for this session and again improved his personal best time of the day to take third overall whilst Gabriele put in an impressive lap to take second fastest overall on the day for his front row starting position.

All four Honda Civics raced through to Q2 where Mehdi Bennani took 7th fastest time in the Proteam Racing Civic one place ahead of Norbert Michelisz in the Zengo" Motorsport car. This means that Honda Civics will fill row 2 for Race 2 as the grid is reversed for the second race of the Sunday event. Norbert was delighted to see that the Civics are increasingly competitive at the front of the grid.

“We are closing on the opposition and I really feel confident for points from Race 2,” said the young Hungarian.

“I am really proud of the team today. We proved that we are on the right way, step by step to enjoy the results. The car is better and has improved a lot. We worked during the practice on the set up for the long run to prepare for the race. It is also a good result for the private team cars to show that the Civic is right on the pace.”

Tiago Monteiro too was pleased with the improved performance.

“The team has worked very hard to improve all aspects of the car and the results show this performance increase. I was able to push the reigning Champion out of Q2 and take my place in the shootout which shows we are getting stronger at each race. I am really looking for another podium result from the first race tomorrow.”

For Gabriele Tarquini this front row start is the closest he has been to a Race 1 pole position this season so far.

“It was difficult right at the start of Q1 with the circuit drying but we made the right decision on tyres. I pushed as hard as possible today and am delighted with the results. I have a very good set-up for the races tomorrow and feel confident. We need to check the weather forecast in the morning and it will also depend on the passing chances right after the start.”

“We worked on the control system of the engine, but this achievement is mainly the result of the work of the whole team. They made an important step forward and now we have to take more steps in the right direction.”