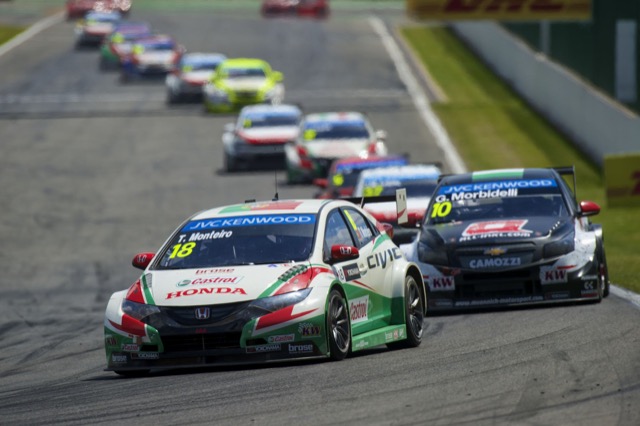 Tiago Monteiro fought for every one of the 18 laps in the two races here at the FIA WTCC event at Spa in Belgium in his efforts to gain championship points. He started the weekend 4th in the drivers’ championship with 113 points and after his two sterling drives leaves the Belgium circuit having increased his total to 125 and maintained his place ahead of Castrol Honda team-mate Gabriele Tarquini in 5th place with 105 points.

In Race 1 Tiago made his normal flying start to cut through the field from 10th position on the grid into 6th place at the end of lap 1. He was up to 5th by lap 5 and closing on the 4th place car on the final lap. He risked everything with a passing move on the very last corner but was not able to make the pass and lost speed and his position to finish 6th.

Gabriele Tarquini made an equally good start in Race 1 but tangled with another competitor going into the very fast Eau Rouge and nearly lost the Honda and dropped places  to fall behind Norbert Michelisz in the Zengo"  Motorsport Civic but ahead of Mehdi Bennani in the Proteam Racing Civic. Bennani then was penalised with a drive through for running wide off the track but finished 14th overall. Michelisz and Tarquini came home in 7th and 8th places respectively.

Hopes were higher for Race 2 with Bennani on the front row ahead of Michelisz with Tarquini and Monteiro filling row 3. Whilst Mehdi had a difficult start, Monteiro once more fired his Civic off the grid into second position on the first lap with Michelisz in 4th ahead of Tarquini. Tiago was pushed down to 3rd on lap 4 and lost another place with 2 laps to go but hung on bravely for a strong 4th place finish. After the frantic start Michelisz and Tarquini ran consistently in 7th and 8th positions to the finish whilst Bennani’s difficult day resulted in 11th place for Race 2.

Monteiro acknowledged the congratulations of the Castrol Honda World Touring Car Team for his hard work.

“I had hoped for better results actually but it was very difficult to resist the challenges but the Civic is undamaged which is good news as we ship the cars to Argentina this week. We will now be able to test some new components in July which we hope will give us more performance for the second half of the year.”

“I had contact in Race 1 which was at the very quick place on this circuit and could have been quite dangerous and in Race 2 we were just missing speed where these long straights make it difficult for us.”

Whilst Norbert Michelisz enjoyed his first ever race at Spa he had expected better result after qualifying.

“I had some tricky moments with contact and other cars positions and could not close the gap on the competition.”

At the end of the European sector of the 2014 FIA World Touring Car Championship Alessandro Mariani, Managing Director of J.A.S. Motorsport was positive about the Spa result.

“It was a very good weekend for Tiago. For Race 2 he was very near the podium. I am happy with the results on this difficult track. Now we need new parts to increase our performance for the second half of the season.”