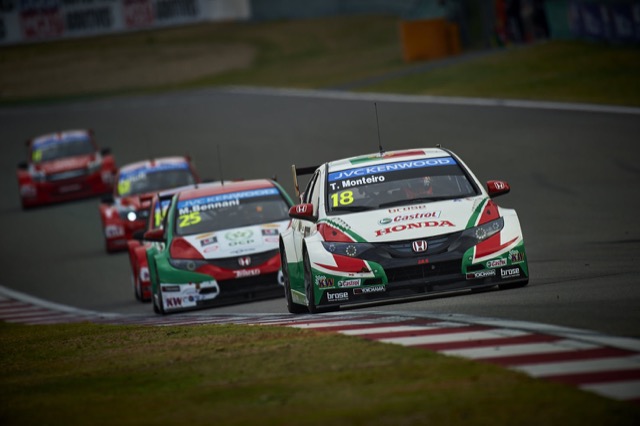 The Zengo Motorsport Civic WTCC of Norbert Michelisz will start from the second row of the grid in Race 1 of the FIA World Touring Car Championship in Shanghai tomorrow, having been the fastest of the four Honda Civics in the official qualifying session this afternoon. “Norbi” won through to the final single lap shoot-out having set 5th fastest time in Q2 just ahead of the Castrol Honda Civics of Tiago Monteiro and Gabriele Tarquini in 6th and 7TH places. Mehdi Bennani set 10th fastest time in his Proteam Racing Civic to grab the pole position starting spot for Race 2.

The long, fast Shanghai track is both hard on tyres and also requires slipstreaming to achieve the best lap times. In the final seconds of the second qualifying session all four Civics took to the track together and worked as a team to improve times with Bennani benefitting most to improve to 10th overall. Tiago will start Race 1 on the 3rd row immediately ahead of team-mate Tarquini who will  then be on the 2nd row when the top 10 places are reversed for the second race.

“I am feeling very confident to be honest, the Civic is really responding well, “ said a happy Michelisz. ”I had hoped the gap was going to be smaller but for me that was the maximum. Row 2 is good and hopefully we will get a result.”.

Michelisz’s position impressed Alessandro Mariani, Managing Director of J.A.S.Motorsport. “It proves that this first evolution is working. We are confident for the future because we will have new parts that will improve the Civic further and that is very positive.”

Daisuke Horiuchi, Large Project Leader for WTCC development for Honda R & D was pleased with the continued improvement in performance.  “We have proved on the long lap of Shanghai that the engine has the power. This is one step forward and Suzuka will see a further step forward.”

Tiago Monteiro was satisfied with the overall performance. “We feel that we have made progress and we aim to confirm this with a good result tomorrow.”

Gabriele is also positive with this result. “I’m happy with the progress of the Civic development but today it was not quite enough because this is a very fast track.”

For Mehdi Bennani the pole position is a great reward. “Our strategy worked perfect! We had changed the set-up considerably after the practice and it really improved the Civic. I was sure of my game and that I could push Coronel out in the last lap to take 10th position. The car was perfect. I’m very proud to be in pole for race 2 and, of course, I’m happy to be a Honda driver!”