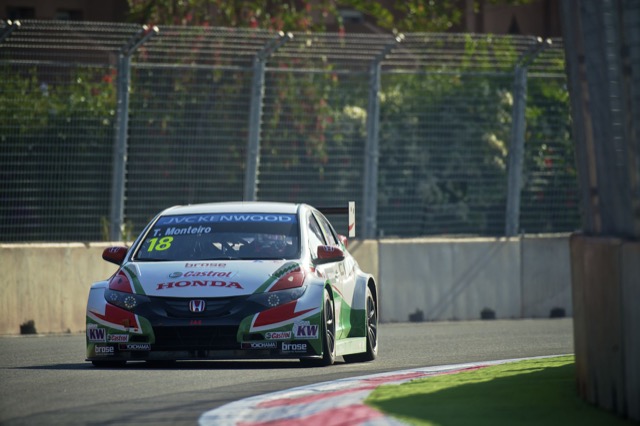 Early in the first free practice session Tiago Monteiro experienced mechanical problems with his number 18 Honda Civic which curtailed his track time and necessitated a turbocharger change ready for the second session. Worse luck was to come early in the second free practice session for the Castrol Honda World Touring Car Team when Gabriele’s car was hit hard in the side by a competitor who had failed to negotiate one of the difficult chicanes. The experienced Italian was badly shaken by the severe impact and the chassis was totally ruined putting a sad end to Gabriele’s weekend.

“I had over-run the corner and was waiting to get back onto the track when he missed the chicane and hit me hard. We did not want this to happen so soon in the season and as we only have a few days to prepare for the next event in France I am anxious; but I hope the team can build a new car in time” said Gabriele.

Qualifying this year has been changed; after Q1, a 30 minute session for all competitors, the fastest 12 cars go forward to Q2, a 10-minute session that determines firstly, the fastest 5 cars to go to the new, single-lap shoot out for pole position of Race 1 and also establishes the grid for Race 2 where the fastest 10 cars are reversed for that grid. Many of the drivers admitted that their target was to get into Q2 at this first race of the season. The three remaining Civics advanced into Q2 with Monteiro taking 7th position, Michelisz 8th and Bennani 9th. This puts the driver of the Proteam Racing on the front row for Race 2 on Sunday with Michelisz and Monteiro in command of row 2.

“To be honest that was quite hard work”, reports Tiago Monteiro. “We have issues to find our speed but this is a big development programme and this is just the first stage. Small problems always contribute to losing time but I know we have the full package in the car and I am confident we will soon get there. The new design of car needs the driver to be much more aggressive to make it work, it is much closer to a full GT race car now.”

Norbert Michelisz, in the Zengo Motorsport Civic, had two clear aims for this first event: “I was determined to get into Q2 but also to try as many things as possible during the weekend so that we build knowledge of how the car works and what effect changes to suspension settings make to the handling. The aim is to have a faster car for the next race event for sure.”

For Bennani’s many fans his front row success was a reason to cheer even louder as the smiling driver got out of his Civic which proudly carries his National colours.

“I am really happy for the first time out. I am certainly using Marrakesh for testing as I have had very few laps before the event and we need maximum information for future events. I need lots more miles to become fully understanding the front wheel drive race technique but this is a good start. I really tried hard for the team today and I am looking to collect points this weekend.”

The 2014 Honda Civic WTCC is a more complex technical machine than the previous model. Daisuke Horiuchi, Large Project Leader for WTCC engine development from Honda R&D, was satisfied with the engine performance at this first event.

“The new engine works very well. I believe that traction and acceleration are the same as the competition. The current specification of engine management has been determined from our testing. This year’s engine has quicker throttle and turbo boost response. The new regulations have allowed us to lighten the engine and we are saving 10 kgs overall. We have improved fuel mapping and the Anti-Lag System that controls the turbo performance. The new chassis design also allows us to have a better exhaust layout. Our challenge is to improve step-by-step as the season goes forward.”