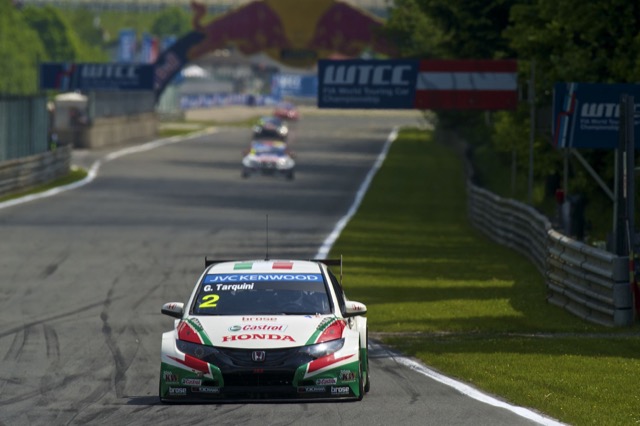 Less than a second covers the top ten cars on the grid for the FIA World Touring Car Championship race at the Salzburgring in Austria after the official qualifying sessions. Four Honda Civics finished the session within this close group with Gabriele Tarquini in 10th place for Race 1 which will then put him on the front row in pole position for the reverse grid Race 2.

Castrol Honda team-mate, Tiago Monteiro led the Civic parade in 7th place ahead of Mehdi Bennani in the Proteam Racing Civic with Norbert Michelisz of Zengo" Motorsport in 9th position. This means that the front two rows of Race 2 will be exclusively Honda Civics with all four drivers looking to add Championship points to their scores. Coming into the Salzburg race Tiago Monteiro held fourth position overall in the drivers’ championship ahead of Tarquini with Michelisz and Bennani 9th and 11th respectively.

The fast straight line characteristics of this circuit mean that the most competitive times are secured through slip streaming, two cars running very close nose to tail where the car behind benefits from the reduced air drag which is broken by the car in front. Team tactics must be employed to get the maximum advantage from this close running and all four Civics ran to a strategy to maximise the benefits. The high speed corners of this track also demand a very fine balance of the car by the drivers as the margins for error are thin and the narrow run-off areas leave little room for error.

Gabriele is looking forward to starting Race 2 from pole position. “First of course I have to complete Race 1 and there will be a lot of high speed traffic so I have to be careful right from the start. I did not get any slip streaming benefit and set my qualifying time completely alone. For Race 2 I have three Hondas to support me. I hope it is them to fight with any opposition trying to reach us. For sure it will be a difficult race tomorrow but my target is to add more points from the race.”

Tiago Monteiro set the fastest time of the four Civics: “We knew that Salzburgring was a difficult track for the Hondas but I built up my confidence with every lap and we got a good balance in the car as the day went on. We will see what happens in the race tomorrow and we will all work hard for good results from Race 2.”

There is a specific technical challenge at the Salzburgring which is high in the Austrian mountain region. “Reduced barometric pressure means that the air is less dense as we are high and this requires that we adjust the engine map to ensure that we maintain turbo performance at this height. We have also improved the throttle response from the last race,” reported Daisuke Horiuchi, Large Project Leader for WTCC engine development from Honda R&D.