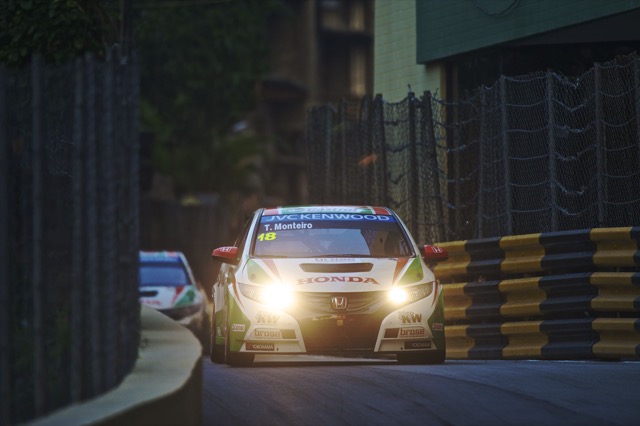 The Castrol Honda Civic of Tiago Monteiro will start from the front row of the grid for the second consecutive race, the on-form Portuguese star and race winner in Shanghai, taking second fastest time in qualifying here at Macau. The daunting street circuit lived up to its tough reputation with crashes bringing out the red flag to stop Q1 three times, leaving the drivers just a few laps to dial in suspension and tyre settings. Gabriele Tarquini, with third fastest time, will start Race 1 from row 2 and Norbert Michelisz will start his Zengo Motorsport Civic from row 3 having set 5th fastest time.

Monteiro set his fastest lap time of 2m 30.969s early in Q1 and sat in pole position for most of the qualifying session which was interupted three times whilst damaged cars were cleared from the narrow street circuit. Right at the end of the session he led out the other two Civics to give a slipstream tow to be certain all three Hondas went into the final 15 minute shootout of Q2 for grid positions for Race 1.

The red flag again interupted the final qualifying period and it was only on the very last lap that the three Civics in line astern challenged the timing system to become the most numerous make in the top five for the penultimate race of the 2013 FIA World Touring Car Championship.

At the press conference after the qualifying the two Castrol Honda drivers flanked pole man Yvan Muller and Tiago Monteiro was especially pleased with second fastest. “I am very happy with the car, we got the balance correct quite quickly. I love the Macau circuit it is a big challenge. I am still  amazed that we continue to discover new elements about this car to be quicker each time we run. I really did not expect to do quite so well in qualifying here and I am really looking forward to tomorrow’s race.”

For Tarquini Q2 could have been a much different result. “I was a bit too optimistic on the first run in Q2 and just caught a tyre barrier on the exit of Fisherman’s corner but was able to drive straight back to the pits. I was very lucky not to have more serious damage and the JAS team repaired the Civic immediately and although I could feel a small steering problem, the car worked superbly for that final lap run. Although I need to collect all the points I can to hang on to second place in the Championship I am not going to miss the chance to win the race if I possibly can,” said Gabriele.

Daisuke Horiuchi, Large Project Leader for WTCC development from Honda R & D is pleased that the Honda Civic WTCC displays ever improving performance. “It is clear to see the progress we have made in the year since we last ran at Macau. Today, with the car 60 kilos heavier than last year because of the success ballast we have to carry, we have improved our lap times by 1.4 seconds. This shows the deveopment progress we have made in the chassis and the engine performance.”