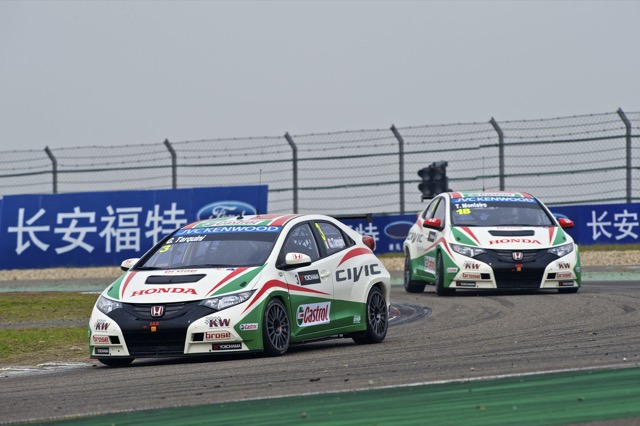 The Castrol Honda Civics of Tiago Monteiro and Gabriele Tarquini will hold the front row of the grid for the second race of the weekend at the FIA World Touring Car Championship event in Shanghai. Excellent perfomances in Q1 saw the Portuguese star third fastest with the Italian in fifth position despite the Civics having to run with maximum compensation weight. The drivers worked together to take advantage of the benefits of slipstreaming each other on the long straight.

However the weight penalty finally proved the expected handicap in Q2 which on this long 4.6km lap meant effectively a single lap shoot-out for the Race 1 grid positions. With just 1.4 seconds covering the top ten cars Tarquini took 9th fastest and Monteiro 10th but with the grid reversed for the second race, the Honda duo will fill the front row of the grid. Norbert Michelisz finished 7th fastest in his Zengo Motorsport Civic and will start from row 4 in race 1 and on row 2 in race 2, immediately behind the Castrol Honda cars.

Tiago is naturally delighted with his pole position: “Q1 was a perfect scenario for us where Gabriele and I could work together. The shoot-out was always going to be difficult for us with the weight but I’m happy to be on pole position for a race this year. It will be great for the show tomorrow.”

When asked by the Eurosport TV commentator if he had planned to aim for 10th fastest so that he took pole position for the second race Tiago replied frankly: “It is difficult to actually play that game as you can get burned and miss the place but in the end today it worked OK.”

Gabriele is also pleased with the qualifying results. “I was happy with Q1 but hoping for a little better time in Q2. When you drive in the slipstream you tend to overdrive the car and lose some time but overall I am very pleased with the balance of the Civic today. Everything we did in the testing proved to work and make the car better. We will have to manage the tyres carefully in the race because the surface is very abrasive.”

Daisuke Horiuchi, Large Project Leader from Honda R & D responsible for WTCC development was full of praise for the team and the drivers. “I congratulate the team and the drivers for managing Q1 perfectly. They worked the slipstream correctly to pull the Civics with all the ballast up to the front of the grid. Gabriele held pole position for quite some time after his best lap. The qualifying times here actually hide the great progress we have made with the Civics since the last time we had to run with maximum weight. This track is not to our advantage and plus this full weight you can see the progress we have achieved in both the engine and the chassis.”