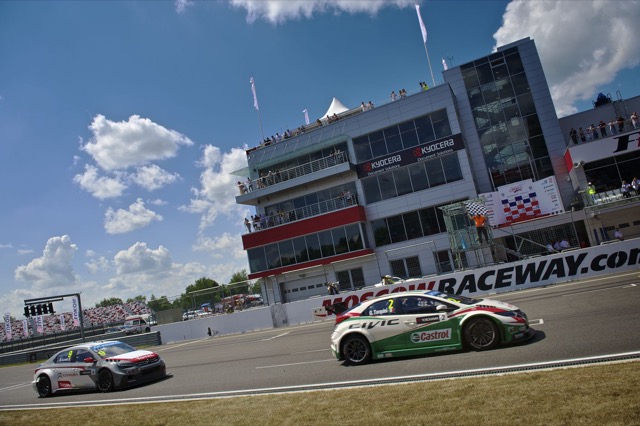 Honda Civic drivers made podium appearances in both FIA World Touring Car Championship races today at the Moscow Raceway with Gabriele Tarquini taking a hard earned second place in Race 1 and Mehdi Bennani of Morocco taking his first ever podium place driving a Honda by finishing third overall in Race 2.

The four Civics running in this season’s WTCC proved highly competitive this weekend with front row grid placing for Tarquini for Race 1 and Norbert Michelisz and Mehdi Bennani challenging at the front of Race 2. For Mehdi this was a fulfillment of his dreams since the start of the season at his home circuit of Marrakesh and proof of his driving skills and also a reward for the hard work of the Proteam Racing squad.

From his front row starting position in Race 1 Gabriele Tarquini accelerated towards the first corner determined to lead the pack on the first lap but Lopez took a wide line to hold the position and the Italian battled for the entire 16 laps to hold on to second place at the finish for another podium ceremony. Castrol Honda team-mate Tiago Monteiro slotted into 4th position for the early laps but over braked on lap 4 and dropped to 7th place. The Civics of Norbert Michelisz and Mehdi Bennani finished in 9th and 11th places.

Tiago was disappointed with his result. “I had determined to be aggressive from the start but there was no way through for me and both Gabri and I lost time. Then I was fighting under pressure from Muller and I left my braking far too late and gave away positions. The start will be super important for race 2 to keep in touch with the front cars for the first laps and see what opportunities are available.”

Fresh from his podium appearance Gabriele explained the start. “I nearly lost the car at the start but managed to keep my position. I pushed hard and maybe too hard for the first two laps then I decided to save the front tyres and secure the second position.”

The reversed grid for Race 2 saw Michelisz and Bennani on row 2 with Monteiro on row 4 and Tarquini on row 5. Michelisz moved into second on lap 2 with Bennani 4th and already Monteiro and Tarquini up to 5th and 6th positions. The race leader was given a drive through penalty for a grid infringement leaving Michelisz under pressure from eventual winner MA Qing Hua. Gabriele’s race ended on lap 6 with steering damage and Tiago also stopped on lap11 with electrical gremlins. Michelisz lost places when he ran wide on lap 14 but Mehdi held off Coronel to take a well-deserved third place overall in the Proteam Racing Honda.

Alessandro Mariani, Managing Director of J.A.S. Motorsport was pleased with the final outcome of the Russian weekend’s results. “We are making progress which is confirmed by the qualifying and race results. Our pace was good and I am pleased for Proteam Racing and Mehdi to get this podium. We know what we have to do to prepare for the next event to close the gap to the opposition.”

For Mehdi Bennani being on the podium was a happy occasion. “I am very happy now with this result. The car was perfect. We have had some unhappy results so far this season but this gives a boost for the next races. The WTCC cars are very difficult so I am especially proud - as a private driver - to be on the podium with works drivers.”

For Norbert Michelisz the results did not show his hard work.” I’m not disappointed, I couldn’t do better as I was on the limit of the car and I could not close the gap and defend my position.”

Daisuke Horiuchi, Large Project Leader for WTCC engine development from Honda R&D, was pleased with the results. “The Civics showed a strong performance during the entire weekend; we are closer now and will capitalize on this progress to better prepare the Spa round .”