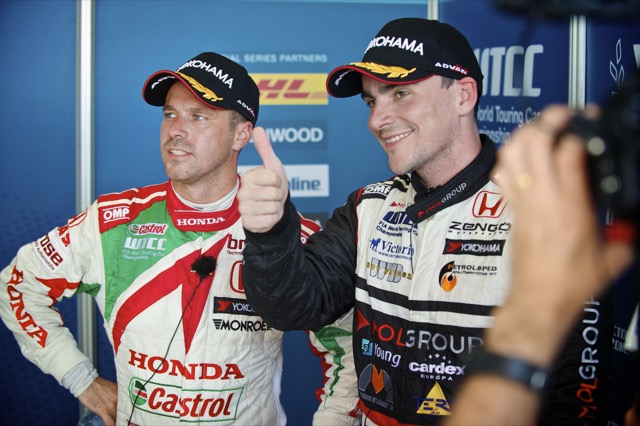 Honda in shoot-out challenge for FIA WTCC in Argentina

The Honda Civics of Norbert Michelisz and Tiago Monteiro fought their way through both main qualifying sessions into the single lap shoot-out for top five grid positions for Race 1 of the FIA World Touring Car Championship event here in Argentina this afternoon.

Michelisz set his fastest time of the day in the shoot-out to grab 4th place on the grid whilst Tiago had to settle for 5th position. The second Civic WTCC of the Castrol Honda World Touring Car Team from Gabriele Tarquini took 7th place, one position ahead of Mehdi Bennani. This means that Gabriele and Mehdi will start on the second row for Race 2 tomorrow and with the excellent starting performance of the Civics they will certainly make an early challenge for the lead.

Michelisz was very pleased with his 4th position after a difficult week.

“My flights from Europe were delayed and it took me three days to get here and I missed the test session on Friday which is always important to set up the car. We had to do that this morning in Free Practice and I was very happy with the car’s balance right away. I have to thank the Zengo Motorsport team – the car is great and I’m ready for the races tomorrow. It’s very important to see that we are now closer to the competition”

For Monteiro Q3 was a little disappointing. “I made a small mistake in turn 9 so then I had to push the front tyres harder and then that loses more time. I always try the maximum, sometimes it works but sometimes not so good but we are in a competitive position for Race 1 and we will see what happens.”

Mehdi Bennani was happy with his result having made a small mistake during Q2 which lost him a couple of places on the grid for race 1. “I’m happy with the final result and again I’m in a great position in 3rd for race 2 and on the second row for a good start.”

Gabriele Tarquini found that his Civic was more difficult as the track matured. “My car was very good to start with then we had some strange problems with the set up. We have some new parts and perhaps something was not quite right but I have the second row start for Race 2 so we must try and get points for the Championship.”

“That was a frustrating afternoon,” said Alessandro Mariani, Managing Director of J.A.S. Motorsport. “The car was good, that was confirmed in the Valencia test and in the free practice here but we didn’t achieve what we expected and have both cars in Q3.”

Daisuke Horiuchi, Large Project Leader for WTCC development from Honda R & D said, “We improve the engine after the tests in Valencia and we are coming closer to the opposition step by step.”