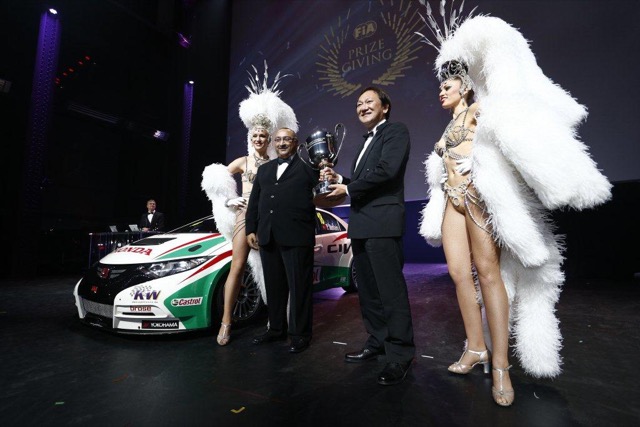 Also at the FIA gala in Paris, Honda received the WTCC Manufacturers’ Championship trophy. This was the first World Title for the Japanese Manufacturer since its Formula One triumphs between 1988 and 1991, when it was McLaren’s engine supplier.

Daisuke Horiuchi, Large Project Leader for WTCC development at Honda R & D, collected the trophy on the stage where the Honda Civic racing car was exhibited.

“This World Championship honour for Honda represents a great reward for everyone who worked so hard on this programme, whether at the tracks or at home in Japan, Italy and Hungary. Thanks to the continuous dedication and expertise of the people at JAS Motorsport, Zengö Motorsport, Mugen and Honda R&D, not to mention the talent of Gabriele Tarquini, Tiago Monteiro and Norbert Michelisz, we achieved four victories and sixteen other podium results; something that gives you a real sense of pride for a first year in WTCC,” said Horiuchi.