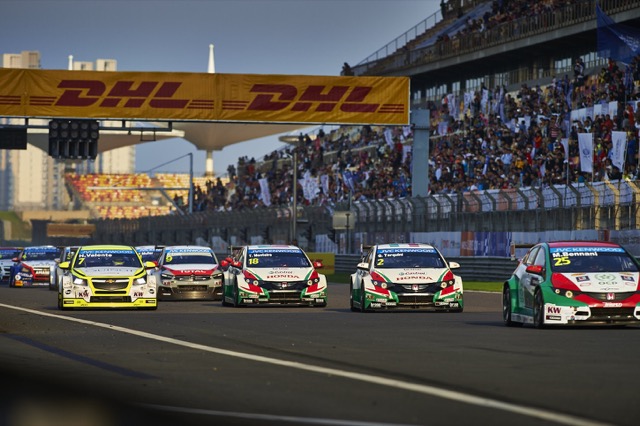 The Honda Civic WTCC took the first victory of the World Touring Car Championship season with an emphatic win for Mehdi Bennani in Race 2 at Shanghai today. In taking his lights to flag victory, the young Moroccan scored his first ever WTCC race win, at the same time becoming the first Moroccan and first African and Arabic driver ever to win a FIA World Championship Touring Car race. To underline this valuable victory, the Castrol Honda Civic of Tiago Monteiro was second overall with Norbert Michelisz 5th.

The Proteam Racing Civic of Bennani  was in pole position for Race 2 having set the 10th fastest time in qualifying. His plan was to make a perfect start and drive as fast as he could for the first laps. In fact he had a 2.1 second advantage at the end of the first lap over Honda Civic driver Gabriele Tarquini with Monteiro third. By lap 5 his advantage was 4 seconds over Monteiro with Tarquini out and Michelisz in a battle with current drivers’ championship points leader Lopez and Loeb.  Mehdi maintained his concentration for every one of the 14 laps to take the chequered flag a comfortable 2.5 seconds ahead of fellow Civic driver Monteiro.

An emotional Bennani embraced his family and team members in victory lane at the end of the race to the cheers of the entire WTCC fraternity who recognise the efforts made by this young driver to make his mark on the World Championship stage.

“This is a fantastic feeling – I think I may be dreaming,” said Mehdi through tears of joy. “Winning is something so special that I have been thinking about for years now. I want to thank His Majesty the King of Morocco for having made this possible, in putting me here amongst the best drivers in the World Championship. I want also to thank my family for the total support, Honda, J.A.S. Motorsport and of course my Proteam Racing of Valmiro Presenzini . I gave 100% from the start to the very end. It’s something wonderful.”

It took him several minutes to get his breath back before taking the Moroccan national flag to the top step of the podium to hear his national anthem played for the very first time in WTCC.

For Tiago Monteiro second place was some reward for a hard working weekend which saw him finish 7th in Race 1 close behind Castrol Honda team-mate Gabriele Tarquini whilst Norbert Michelisz in the Zengõ Motorsport Civic was 5th overall with Bennani himself  10th whilst protecting his Civic for the challenge of Race 2.

“In Race 1 I had a big fight with Loeb and with the tyres degrading fast I was right on the limit. Race 2 victory proved that we are working together with the private drivers and that they have the same car as our factory team. So I’m happy for Mehdi and for Honda. We keep fighting in the upcoming races,” said Tiago.

5th and 4th places is a great record for Norbert Michelisz in the Zengõ Motorsport Civic WTCC. “I am proud of my results here. I did the maximum to help my colleagues from Honda in the front of the race, because that was my plan in Race 2, helping to keep the gap between the Civics and the competition. So I’m very happy with this first victory for Honda.”

Victory is sweet for everyone involved with the Honda WTCC program. Alessandro Mariani, managing director of J.A.S. Motorsport said, “This is a significant victory, for Honda, but also for the customers with the Civic because they are important for us. It’s a pity that Gabriele had the power steering problem, otherwise we could have had a 1, 2 ,3 podium. We proved that we had the right pace in Race 2. Everyone worked hard in the last months and weeks, this victory is good for the morale of everybody.”

Daisuke Horiuchi, Large Project Leader for WTCC development for Honda R & D was also delighted with the race win. “This victory proved that we have the power. After improving the car in Beijing, Shanghai was the next step and now we are looking forward  to make another step in Suzuka.”

It was a great day for Honda as the Civic also took its maiden victory in the national Chinese Touring Car Championship race.