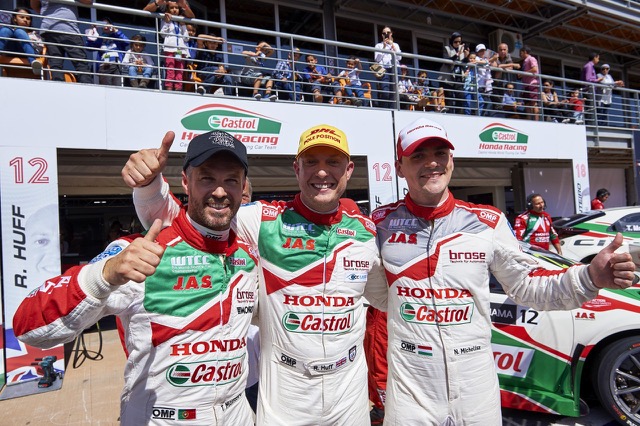 Sensational 1-2-3 for Team in Quali

Rob Huff led a sensational 1-2-3 for Honda as the Civic WTCCs dominated qualifying for round four of the FIA World Touring Car Championship in Morocco on Saturday.

The Castrol Honda World Touring Car Team driver was confident of a strong run through qualifying after setting the pace in the morning’s opening free-practice session, and went fastest in Q1 at the revised Circuit Moulay el Hassan in Marrakech.

After safely making it through Q2, the 2012 WTCC champion lapped the 2.9km circuit in 1:21.743 to take provisional pole position, and then watched as his Honda team-mates Norbert Michelisz and Tiago Monteiro secured second and third spots to complete the lock-out.

It was the 12th WTCC pole of Huff’s career and his first since joining Honda during the winter, guaranteeing him the top spot on the grid for Sunday’s main race.

The British driver’s achievement also secured him five bonus points in the drivers’ championship, moving him to within 12 points of the top three.

Norbert’s second position marked his first front-row starting spot since becoming a Honda factory driver and helped move him up to fifth in the drivers’ championship, while Tiago’s third spot means he is now only 11 points off the series lead with 25 available for each race victory.

Tiago will start Sunday’s opening race from eighth place on the partially-reversed grid. Norbert and Rob will be right behind him in ninth and 10th.

Following qualifying, the fourth MAC3 session of 2016 took place. The Hondas were on course for victory when Norbert clipped the wall during the final lap of the session and sustained a left puncture. Crucially, he battled to the line, ensuring third place – and six manufacturers’ championship points – for Honda.