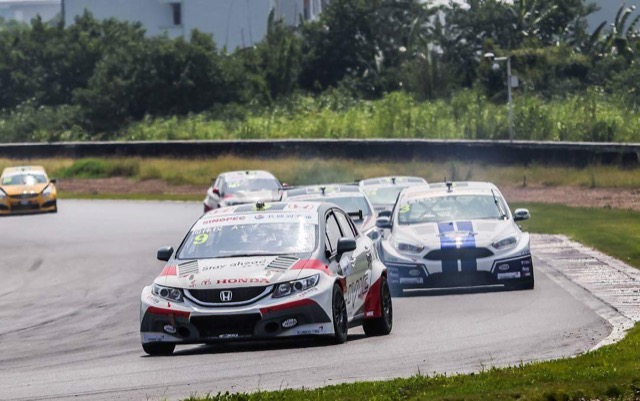 Ten Second Advantage at the Flag

Henry Ho took a commanding victory for Honda in the latest round of the China Touring Car Championship at Guangdong. Henry had a 10 second advantage at the chequered flag bringing the JAS-built Dong Feng Honda Civic home ahead of the field.

Ho’s team-mate Martin Xie had put the second JAS Civic on pole position in qualifying but was penalised 10 grid places for the race following an engine change after the previous championship round. Martin drove superbly through the field to 2nd overall after 9 laps but an electrical connection fault forced his retirement.

This was Henry Ho’s second CTCC victory. Having started the race from third place on the grid Henry moved into the lead on lap 7 and then drove away from the field to take the top step of the podium at this the 5th round of the 2015 Championship.

“The whole teams worked perfectly this weekend,” reports Mads Fischer, Customer Support manager for Jas Motorsport. “Henry and Martin headed the timesheets on every session and Martin’s pole position was a great reward. Henry drove perfectly in the race and really showcased our Civic’s performance. To have a 10 seconds advantage at the flag against the very tough competition was a great result for JAS and Honda. The Dong Feng Honda Racing team really have the Championship challenge running well now.”

The two JAS-built Honda Civics will contest the next round of the CTCC at Shanghai on September 28th where the CTCC joins the FIA WTCC.