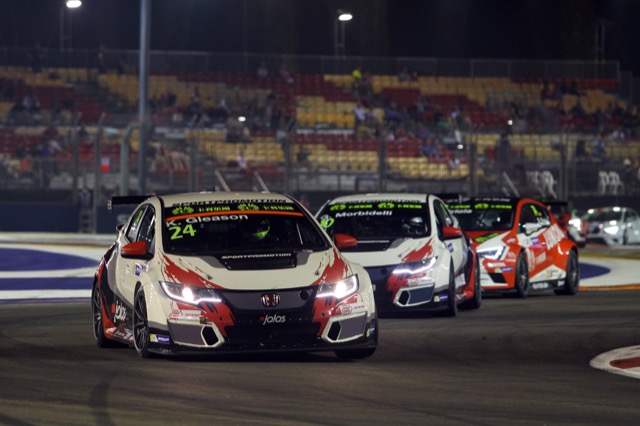 The JAS Motorsport built Honda Civic TCR machines were back in the spotlight at a spectacular night race in Singapore, part of a doubleheader taking place alongside the Formula One Grand Prix.

Both Gianni Morbidelli and Kevin Gleason showed they had no rust at all after the lengthy summer break to thrill a capacity crowd gathered under the still night air.

Following an excellent showing in qualifying, where the Italian was just 16 thousandths of a second away from pole position and the American a solid third, race one was to provide a second win of the season for Gleason.

Kevin was able to catch the initial leader by the eighth of 10 laps with a solid overtaking manoeuvre, setting him up to defend well for the remaining two circuits and an emphatic win. Morbidelli had a close fight of his own with another championship contender, but his JAS-built Civic inched ahead at the chequered flag to take a solid third-place on the podium.

Gleason: ““It was a tough race and a nice second win for me, no doubt. I took a good start but had a lot of pressure from Oriola and Gianni in the early laps. Then, my pace improved throughout the laps and when Stefano lift off because of some trouble, I could take the lead. In the closing laps though, when his car was back to OK, I was under great pressure again. Definitely, a tough race, also because of the heath and night conditions, but there my experience in long-distance races helped…”

Morbidelli: “A very tough race for me, also because I didn’t feel perfectly well these days and during the race it got worse. The last couple of laps I was close to fainting. Regarding the race, I lost it at the start. I had a poor kick-off, with the wheels spinning and had to let Comini, Gleason and Oriola go. After I fought hard with Pepe and Kevin, but they defended well their positions, and rightly so. Overtaking on this track is not easy at all.”

Meanwhile, race two took place early in the morning of the next day. Grid positions were reversed, which meant that the JAS Civic drivers had to battle through the field around the Marina Bay Circuit. As it is very difficult to overtake at this particular venue the drivers had to be content with less spectacular results, although Morbidelli did enough with fourth place to keep himself in contention for the TCR series driver’s title. Gleason was just behind in fifth place after a bold move on the penultimate lap.

Rene Muennich enjoyed his return to the West Coast Racing team in the JAS-built Civic and finished in tenth and eleventh places.

Thailand is next up, in late October.