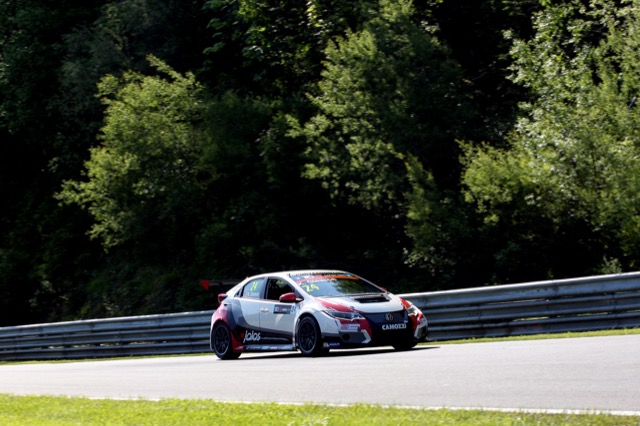 Gleason Looking for First Win of the Season, Morbidelli to Extend Series Lead

The stars and stripes were flying on Saturday afternoon over the beautiful alpine circuit of the Salzburgring, as Kevin Gleason scored his second pole of the TCR international series season. Gleason and teammate Gianni Morbidelli finished off the qualifying session in style by taking first and second position at the last gasp, literally as the chequered flag was waving. This means that the West Coast Racing JAS Honda Civic TCR team secures the front row of the grid for the first of the two races in Austria on Sunday.

“I’m really pumped. The team has worked very hard and the car is absolutely perfect. I got it done on the last lap and I will be going for my first victory of the season tomorrow,” enthused Gleason.

There was a glimpse of what was to come from the American during the first qualifying session when Gleason set second quickest pace, before that time was disallowed for a technical reason. When the all-important second session got underway the Hondas were initially placed further down the timing board, before surprising everyone at the circuit right at the last moment.

Championship leader Morbidelli will no doubt be satisfied with his front row position, ahead of his nearest competitor in the series, Stefano Comini. Morbidelli chose to let his driving do the talking after his rival made some controversial comments linked to last week’s race in Monza, leading to a penalty from the stewards.

Igor Skuz ensured that there were additional reasons to celebrate in the West Coast Racing JAS Honda Civic pit, as the Kiev driver secured pole position for the second of Sunday’s races with a 10th place finish in qualifying.