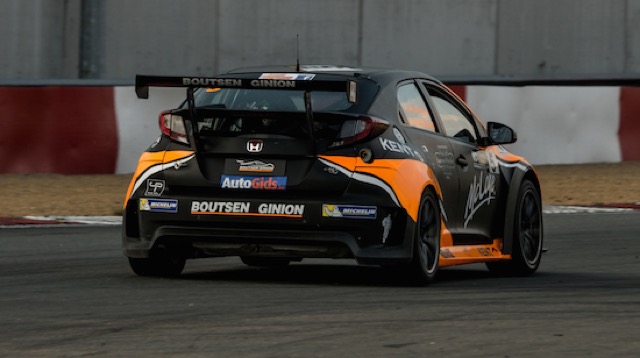 Josh Files Inches Closer to the Series Title in Germany

Torrential rain caused havoc over the weekend at the latest gathering of the TCR Germany series. Target Competition's Josh Files, the runaway leader of the series in his JAS-prepared Civic, started off the weekend as he meant to go on by putting his Honda on pole, ahead of two other Civics piloted by Dominik Fugel and Steve Kirsch.

However, there wasn't much to write home about in the two actual races themselves. Both were marred by heavy rain and numerous incidents and there were more safety car interventions than competitive racing. Indeed, race one was only allocated half points after it was drastically reduced in distance and race two only had one full racing lap run under green.

Among the carnage, Files was able to finish second in the first race and fifth in the second. He maintains a 41.5 point lead over his nearest rival with just one more gathering of the TCR Germany series, at Hockenheim on October 2.

Following the tradition of running a star driver as the second team member in the TCR Benelux series, Touring car veteran Matt Neal took to the track at Zolder for the first two races over the weekend. In the JAS-prepared Civic TCR the three-time BTCC drivers champion finished sixth and fifth in the Boutsen- Ginion entered machine.

Teammate Stéphane Lémeret then took over for the last two races, netting a good haul of points and second place at the finale. Lémeret now leads the TCR Benelux series by 58.5 points as the series reaches its midway point.

Meanwhile, the TCR Asia series was in action as well, visiting Shanghai over the weekend. Tin Sritrai started  from pole position in his JAS-prepared Civic TCR, and ultimately finished second, ahead of two similar cars driven by Michael Ho and Henry Ho. None of the cars finished race two.