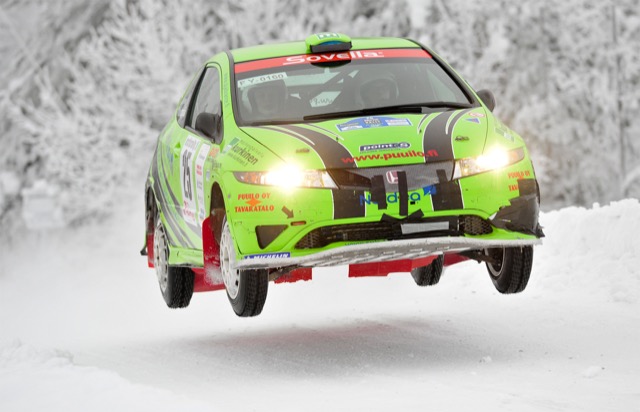 As the winter draws in the European motorsport award season is beginning to heat up.

In an upcoming ceremony in Paris, Zoltan Bessenyey and co-driver Yulianna Nyirfas will be crowned the 2013 FIA ERC 2WD champions.

However, further north in Finland the silverware for other Honda Civic Type R drivers has already been awarded. At the recent Finnish Rally Championship awards night PJ Racing’s Jussi Vainionpää and co-driver Mika Juntunen took to the stage to collect their SM2 2WD class trophies.

2013 has been a fantastic season for the Finnish pair, including four victories as well as a third and fourth place. The results allowed Jussi to secure the driver’s championship with 157,5 points and stay ahead of fellow Civic Type R driver and main rival Esa Ruotsalainen. Indeed, with thirteen other Honda Civic Type R’s competing in the SM2 class of the Nordic championship, the casual observer can be forgiven for thinking it’s a Honda Cup.

“The Finnish Rally Championship consists of seven rounds - three on snow and then four on gravel during the summer months,” explains Jussi.

“I won the three on the snow, but the gravel rallies in the summer proved harder to finish and ultimately score enough points. Nevertheless I won again and in the last round a 7th or 8th place was enough to secure the title. I ended in 4th so were delighted that the title was ours.”

Despite his young age the 24 year old draws on a lot of experience, having started in rally sprints at the tender age of sixteen. And in 2007 he acquired the necessary license and appeared for the first time at the start of a rally in a Civic Type R.

“In Finland almost everybody drives with a Civic Type R in 2WD, so it was an easy and quick decision to make when selecting what car to drive. But most importantly was the Civic Type R reliability. For next season though I’m aiming to join a higher class and, together with my co-driver Mika, compete for the overall Finnish title. My dream is of course to make a career in rallying, become a Flying Finn and win the 1000 Lakes Rally.”

“My father Alpo manages the team, so I’m sure he’ll be looking to find another, young Finnish driver who wants to follow in my footsteps in SM2.”