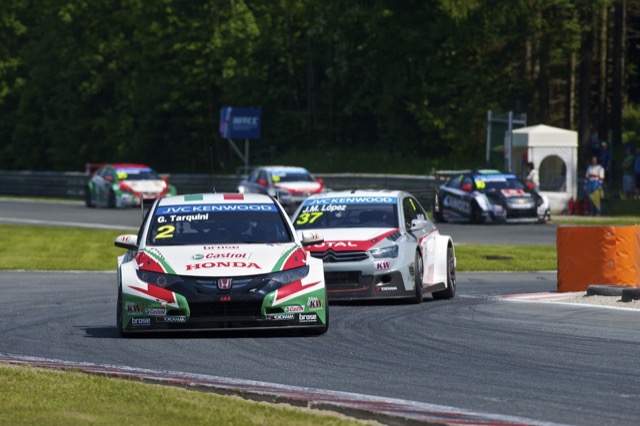 The Civics of Gabriele Tarquini, Tiago Monteiro and Norbert Michelisz delivered a stunning performance at the Salzburgring in Austria last month, crossing the finish line in 2nd, 3rd and 4th place and triggering wild celebrations under the winner’s rostrum.

“It was the best possible result and a great confidence boost for the whole team”, said Gabriele Tarquini, who shared the champagne moment with team mate Tiago Monteiro after starting Race 2 from pole position.

After this strong result in the Alps, the entire Honda squad, including the Castrol Honda World Touring Car Team (Tarquini-Monteiro), Zengo" Motorsport (Michelisz) and Proteam Racing (Bennani), now travel to Moscow for Round 6 of the 2014 FIA World Touring Car Championship.

Located along the Novorizhskoye Highway, some 80 kms away from the Russian capital, the Moscow Raceway is the country’s first ever permanent circuit and, since opening in 2012, the 3.9 kms long track has quickly become renowned for its demanding corners.

“You couldn’t find two more different tracks than the Salzburgring and the Moscow Raceway and it will certainly mean that we have to make a number of compromises with our set-up to be able to cope with the slow corners and long straights”, says Tiago Monteiro, who’s currently in 4th position in the WTCC Drivers’ Championship.

“If it’s hot like last year, tyre degradation will play an important role too, because the asphalt on the Moscow Raceway is pretty rough. There will plenty of parameters which will determine the race results – including the fact that the Civic will run with 20 extra kilos Compensation Weight - but I’m confident that we’ll find the right solutions.”

“The start is always special, because the braking zone for the first corner is in the ideal spot to gain positions”, explains the Hungarian. “The Moscow Raceway suits me and it’s a track that I like. The Honda Civic has the potential to perform very well here, but a lot will depend on the qualifying results, because a good starting position is a big advantage on this circuit.”

Behind the scenes, the technicians at J.A.S. Motorsport have been working hard to improve the car’s performance.

“Their modifications have proved to have had a positive effect”, states Alessandro Mariani, Managing Director of J.A.S. Motorsport. “The drivers were very happy with the behaviour of the Civic in Austria and we are still reducing the gap with the opposition. In Moscow we should have some new elements on the chassis as well, which should allow us to make another step forward.”

After Moscow there is a short break before the WTCC caravan travels to Belgium on the 21st and 22nd June for its final European destination … ‘the most beautiful circuit in the world’.

“Francorchamps is a quick circuit, but it can’t be compared to the likes of the Salzburgring. No, the season is not over yet. I think we can only take stock after the Moscow and Spa weekends,” concluded Gabriele Tarquini.