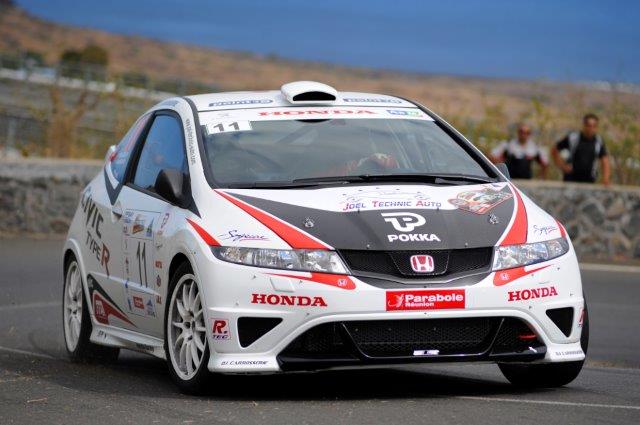 At the finish line of a dramatic Rally de Petite Île, the final round of the La Reunion Rally Championship, Honda Civic Type R driver Mamisoa Rajoël and co-driver Muriel Rajoël beat the odds to be crowned this year’s champions.

It was a surprise end to the La Réunion, which saw the Rajoël duo capitalise on a series of costly mistakes from their fellow competitors. Indeed, it was the last special stages in Petite Île that decided the entire championship.

Up until that crucial moment, championship leader Samuel Bellon was in a strong position, but the demanding conditions forced the Frenchman to retire his 207 S2000 after the first stage. One down! Then the slippery roads claimed its next victim. This time it was Pascal Pausé who stood 2nd in the points. With two key players in the Championship out, the rally was now clear for Meddy Gerville to take advantage and move into the lead in his Lancer Evo IX.

But three stages from the chequered flag, glory slipped away from his fingers too, with the Mitsubishi driver suffering the same fate as Bellon and Pausé.

“Until then we had an eye on a potential 2nd place in the championship,” said Mamisao. “So it’s a strange feeling to be at the finish line as champions because before the start nothing gave us the impression that we would have been able to experience this. For the first time in our career we can write our names as champions. Beautiful! Considering the bad luck that has been haunting us this year, I feel we deserve this title. Even if we had to count on the tough luck of others.”

In 2011 they finished 3rd in the championship and last year they were forced to retire during the last rally, meaning all their title chances were lost. This year they obtained their best score with a 2nd place in the Tour Auto. These points proved crucial too, as without them winning the championship title in Petite Île  would have been impossible.

It’s a happy ending to a season that didn’t start well for the Honda duo. In the Rallye National de Saint-André, the opening round of the Championship, Rajoël slipped heavily off track, causing extensive damage to his Civic. With the help of Sogecore though, the local Honda importer and particularly Marc “ELR” Vandegen, he was able build himself a new machine and put his race for the title back on track. As the saying goes, all good things come to those who wait!