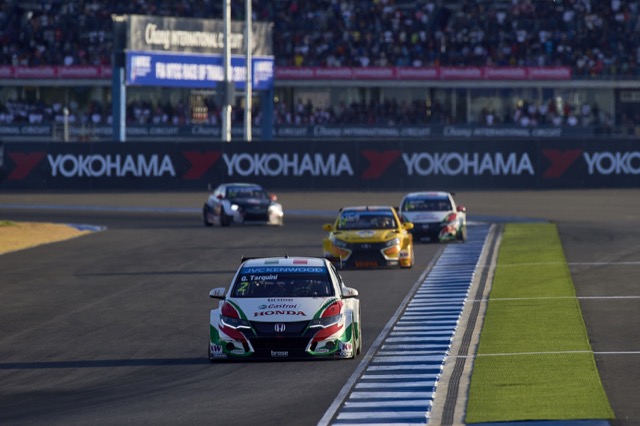 Tarquini Overcomes Rotten Luck to Get in the Points

It has been a frenetic day for the inaugural FIA World Touring Car Championship races in Buriram, Thailand, with five cars eliminated before the second lap in two high speed scuffles in the opening race. Norbert Michelisz became a victim in his Honda Civic – the Hungarian forced into retirement to work on repairs ahead of his second race pole position – a hugely frustrating setback for the team.

Both the JAS Motorsport-prepared Castrol Honda Civic’s made their customary lightning starts, with Tiago Monteiro making his first pass on Nicky Catsburg off the line and, in symmetry, Gabriele Tarquini avoided the slower starting Gregoire Demoustier further down the field. But as the pack bunched up and the fight at the front end intensified, three aside racing between Muller, Monteiro and Tom Chilton ended with contact, resulting in Muller and Valente coming together as the two spilled off the track. Tragically Michelisz, an innocent bystander in the chaos, was collected by Valente and suffered significant damage but a sterling job by the Zengo and JAS teams ensured he would make the all-important  second race.

With the safety car deployed as stray cars were recovered, order was restored in the pack and on lap five Monteiro was running in 6th with Tarquini already placed in 8th. The quo continued over the ensuing laps, albeit with a heavily depleted field and as the green flag was waved, Tarquini would set up his pass on Monteiro (the latter nursing a damaged Civic) to emerge as the front-running JAS Honda.

At the chequered flag Tarquini took a very respectable 5th from 15th, with Monteiro successfully collecting a further points-scoring finish in 7th.

The second, much calmer by contrast, race brought great joy for the Castrol Honda team with Monteiro taking his third victory of the year in superb style. Off the line the second-placed man didn’t quite make the expected start and fell in line behind Michelisz as the Honda train led the field but would stake his claim on the victory just laps later following impressive door-to-door action. In the sister Civic Tarquini had already worked from 10th to 8th and, having avoided the squabbling competition ahead, managed to take 7th from Rob Huff by the second lap.

As Michelisz looked to be suffering with the effects of race one damage, the Hungarian was handed a drive-through penalty for a parc ferme infringement, rejoining at the back of the field.

Meanwhile as Monteiro focussed on the clear track ahead in the lead, Tarquini was once again making his point, embroiled in battle with the race one crowned 2015 World Champion, Jose-Maria Lopez – the duo exchanging positions over the course of the exciting midway laps. On the ninth lap Tarquini went for his move of the race, lunging up the inside of Chilton and Lopez in a bold yet calculated move, but a hard push back from Lopez forced the Civic wide and Tarquini slipped back into 6th.

As darkness quickly enveloped the track, the race was called with two laps to go. Monteiro took the chequered flag in front of a jubilant team with Tarquini gathering the points in 6th after some enthralling hard fights, much to the delight of the Thai crowd viewing their first FIA World Championship.

Gabriele Tarquini (5th/6th) “In the end, after a disastrous qualifying session I scored a lot of points. Starting from the back row and finishing 5th in the first race was very good. I was lucky with the first accident because it happened just beside me and then there was the second incident but I managed to avoid both and gain a lot of positions. For the second race the car was very good – I overtook Lopez two times, but he took me three! I had a good fight with both Chilton and Ma. In the end I took points and I am happy that Tiago was able to win the race – it’s a great result for everyone who works so hard at Honda and JAS.”

Tiago Monteiro (7th/1st): “That was a very good second race! I actually didn’t make the best start this time, I had a little bit of wheelspin so Norbi was able to get away but I knew I needed to find the right moment to overtake and pull away as the others were coming up. I was pushing like crazy; every lap was a qualifying one! And it was getting very dark quickly, which made it increasingly tricky for finding braking points. This is my third win of the year and I am so happy for the whole team – thank you!”

Norbert Michelisz (NC/13th): “In the first race I tried to be safe after a good start I was around P8/9 – I saw that people in front started to fight through turns 5 and 6 so I tried to take different lines to avoid trouble but I think because of contact in front Valente went sideways in front of me and I couldn’t avoid a big hit. The car had a big amount of damage. The guys did a fantastic job in repairing the Civic, and those from JAS, to get the car ready for the second race so I pass my thanks to them. In the second race my car was affected from the earlier damage so it was not easy to keep the pace I had earlier in the day. And then I was told on the radio of my drive-through and unfortunately my race was gone.”

Alessandro Mariani, Managing Director JAS Motorsport: “Very happy - because Tiago had a great race, with very good pace and we have the satisfaction of the quickest lap set by Gabriele, who made a great fight coming from the back of the grid. It confirms the win is from our usual competitive race pace. This boosts team morale and is a great result for everybody.”

Daisuke Horiuchi, Large Project Leader for WTCC Development at Honda R&D: “Everyone in the team worked incredibly hard for this result today and I appreciate that. It was a great team effort and both drivers have taken very good results, especially with Tiago’s win. Still, we need to improve but our target is to get outright pole position in qualifying so we have further work to do.”