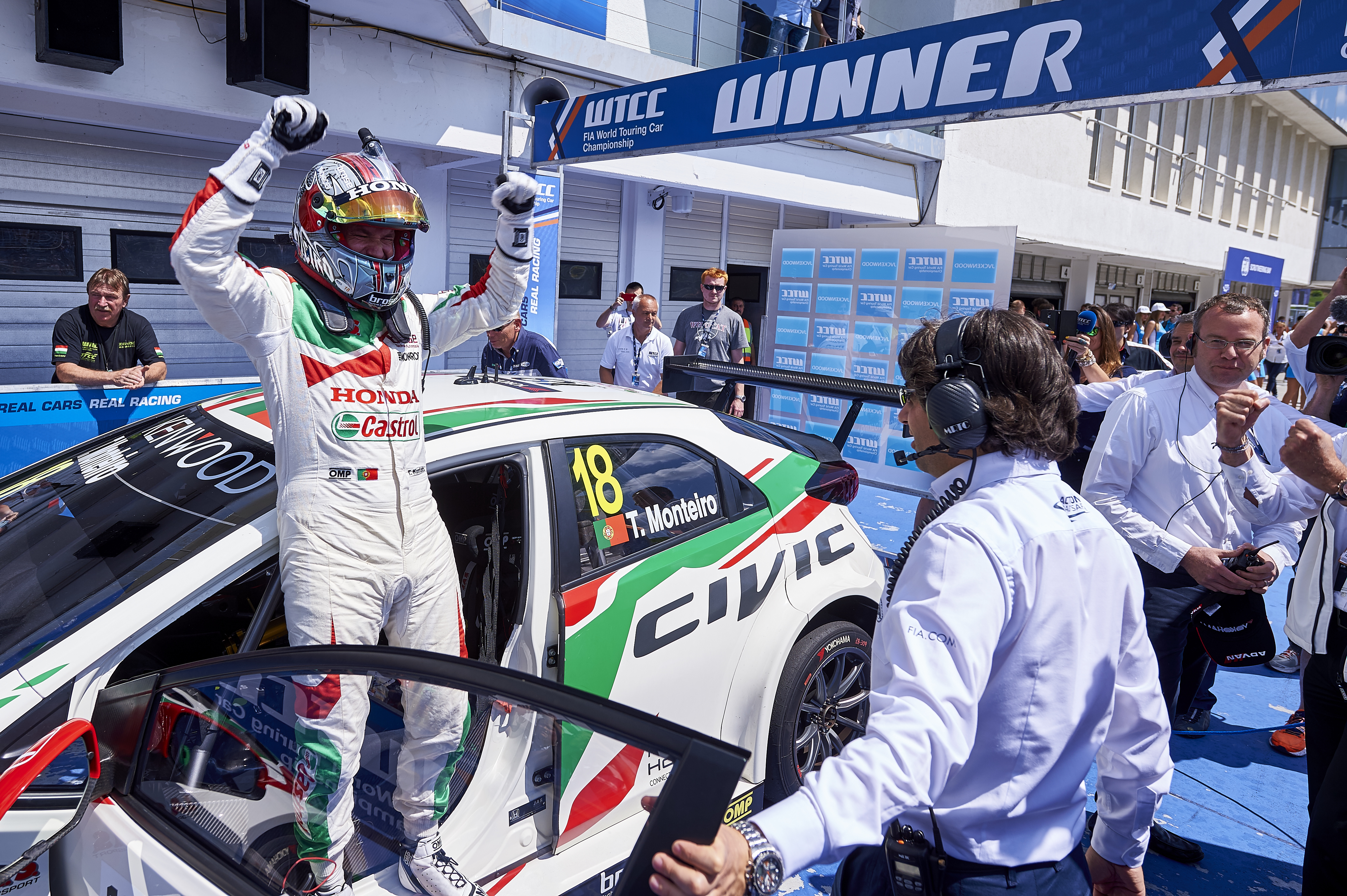 Tiago Monteiro increased his FIA World Touring Car Championship lead with a superb victory for Honda at the Hungaroring.

Having started the Opening Race from second place, the Portuguese driver made a strong getaway to immediately move into a lead he would never lose.

His second victory of the season was also the 11th of his WTCC career and maintained his record of having finished on the podium at every round of the 2017 season so far.

Coupled with the vital points secured with a hard-fought fifth spot in the Main Race, Tiago's advantage at the head of the Drivers' Championship is now 38 points.

In front of 35,000 adoring raceday fans at his home circuit, the Hungarian started fifth in the Opening Race, and expertly climbed to third by the second corner.

Sadly, he was hit three times before half a lap had been completed and sustained a left-front puncture plus further left-side damage, which led to an early retirement.

Fourth place in the Main Race - two places ahead of his starting position – was a strong performance with which to end the day. Norbert lies eighth in the Drivers' Championship.

Ryo Michigami recorded his first double-finish of the 2017 season; the Japanese driver battling hard to 11th place in the Opening Race and 13th in the Main event.

Fellow Honda team Zengo Motorsport maintained their record of scoring points at every round so far in 2017 as Aurelien Panis came home 10th in the Opening Race.

The day's results, coupled with a first MAC3 win of 2017 on Saturday, mean Honda are second in the Manufacturers' Championship, only 12 points away from the lead, with seven rounds remaining.

Tiago Monteiro, Castrol Honda World Touring Car Team, said: "It's been a very good day and I'm delighted to have my second win of the year. From second on the grid, the target was to take the victory and we've done this, despite carrying 80kg of compensation weight. It's a nice points advantage to have so early in the season, but we've seen from what's happened to Norbi at the past two races that you can lose big points very easily through no fault of your own. It's very important to keep building on this at the next few rounds."

Norbert Michelisz, Castrol Honda World Touring Car Team, said: "Another difficult race day. I made a great start, but unfortunately, for the second event in a row, I was hit hard by another driver three times and this ruined my race. Fourth place in the Main Race was OK, but ultimately, I've lost a lot of points and this means the championship will now be a very hard battle. I must say thank you to the fans who came here today to support me; I can't tell you how much it means; it can really lift you when something bad happens. I'm just sorry I couldn't give them the podium they wanted to see."

Ryo Michigami, Honda Racing Team JAS, said: "I'm pleased to finish both races, because after Morocco and Italy, I hadn't really had very much in the way of track time in race conditions. Front-wheel-drive touring cars have inherent understeer and this is something I'm still learning to race with after spending most of my career in high-powered, rear-wheel-drive cars. This weekend gives me something solid to build on and I'm excited to be going to the Nurburgring next time."

Alessandro Mariani, Team Principal, said: "It's a good day for the team. After qualifying, we weren't in as strong a position as we'd hoped, but Tiago has taken advantage of starting the Opening Race from the front row, driven a very strong race to win and has doubled his Championship advantage, all of which is very positive, especially because we worked very hard to make the cars stronger overnight for the races. I'm also pleased to see Ryo finish both races for the first time this year. I am, of course, very sad for Norbi. He's going through a very difficult time right now with bad luck, but he showed a lot of resilience in the Main Race and that's to his credit."

Ryuichi Furukawa, Large Project Leader WTCC Development, Honda R&D, said: "Today is a happy day and an unhappy day. We are happy for Tiago scoring the second win of 2017 for Honda and increasing his championship lead and for Ryo finishing both races, but we are unhappy that Norbi suffered terrible luck that has cost him valuable points. The Main Race showed the true performance of the Civic today, which was that of a car that wasn't quite fast enough to make the podium in normal conditions. While much of this is down to carrying 80kg of compensation weight, we know the car is likely to be heavy at all the remaining events, so it's something we have to work hard on." 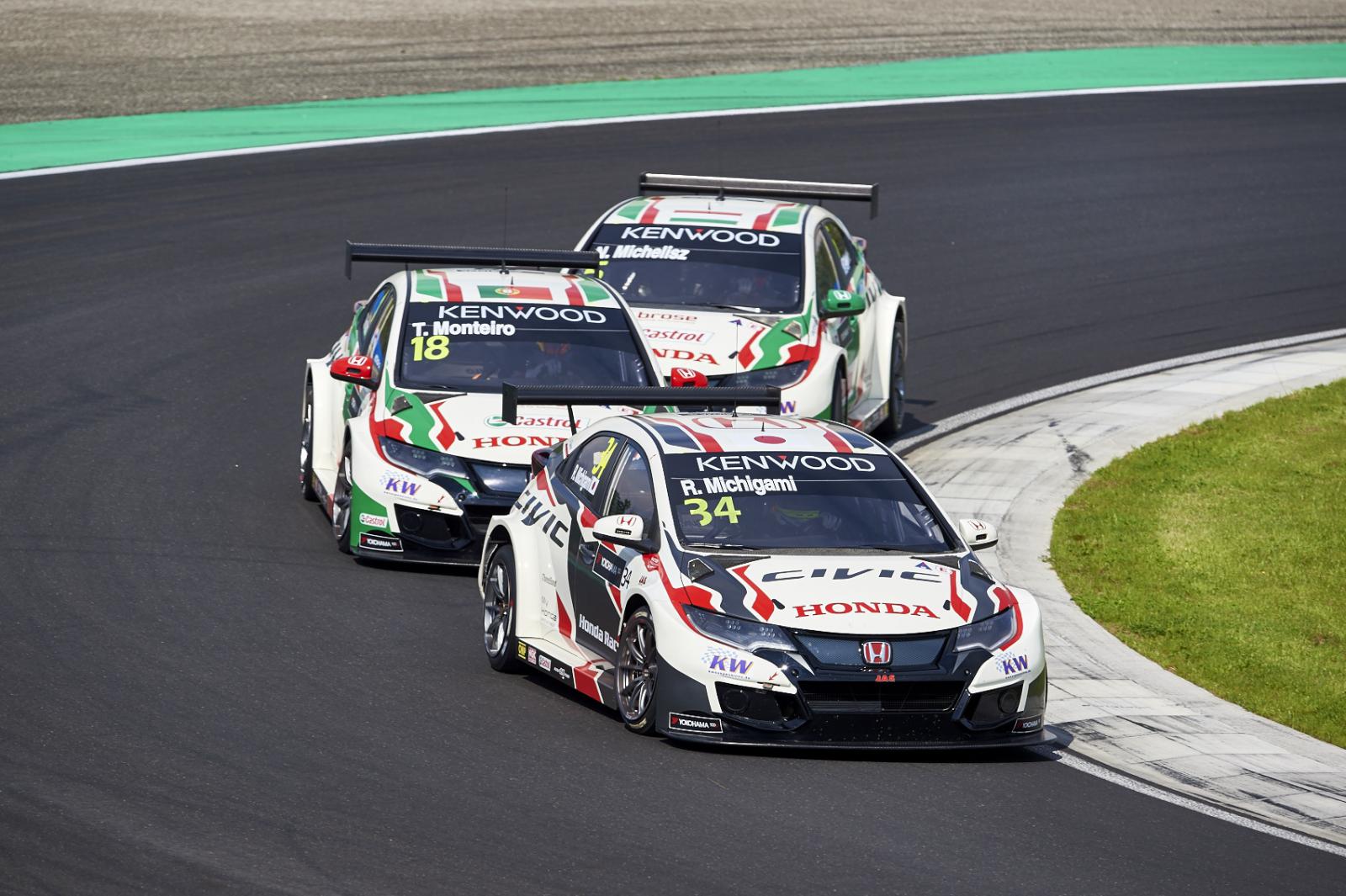