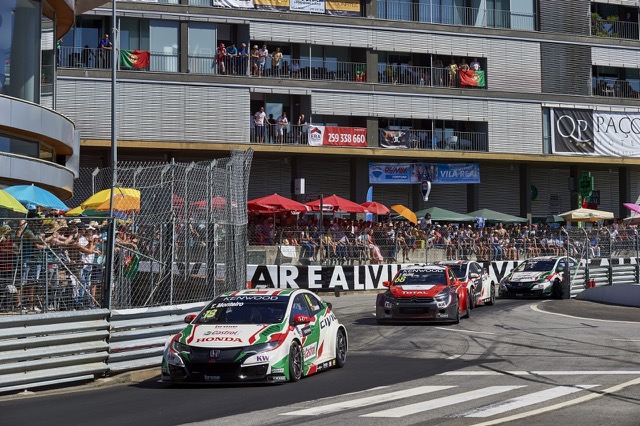 Climbs to Second in the Championship at Half Time Break

The JAS-prepared Honda of Tiago Monteiro was the class of the field at the FIA World Touring Car Championship’s Race of Portugal in Vila Real.

After taking pole position in front of his home crowd, the Castrol Honda World Touring Car Team driver, who lives in nearby Porto, made a superb getaway as the lights went out for the main race and stayed ahead throughout the 14-lap event on the demanding 4.8km street circuit.

It was Tiago’s second victory of the season and the third for JAS-prepared Honda cars this year. For Monteiro, this was the ninth win of his WTCC career.

Behind Tiago, teammates Norbert Michelisz and Rob Huff made it three Civic WTCCs in the top four, despite the cars being heavier than at any other point in 2016 with 60kg of compensation weight on board.

Behind Norbert, who claimed his fourth podium finish in six races, Rob set the fastest race lap of the weekend and claimed the TAG Heuer Hard Charger Award.

Tiago added a 10th place in the reversed-grid opening race with Norbert eighth and Rob, one of only two drivers to make an on-track passing move on race-day, as he climbed a spot from his grid position to finish sixth.

The WTCC takes a six-week summer break before resuming at Termas de Rio Hondo in Argentina on August 6-7.