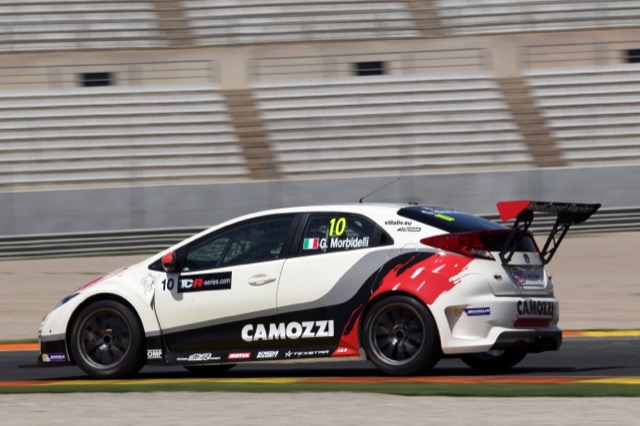 MORBIDELLI BEATS ALL OPPONENTS DURING VALENCIA TESTING IN THE JAS HONDA CIVIC TCR, QUALIFIES ON POLE FOR RACE TWO

Following such a great performance in Shanghai during the last round of the TCR Championship, Gianni Morbidelli was expecting to be at somewhat of a disadvantage as testing and qualifying got underway for the latest series qualifier in Spain. The Italian, driving the lead JAS Honda Civic TCR, is obliged to carry additional ballast on his car in Valencia, as part of Championship rules aimed at equalising performance throughout the season. In pre-event testing the veteran driver was able to set the fastest lap time at the tough Circuit de la Comunitat Valenciana Ricardo Tormo, showing the performance potential of the West Coast Racing team car.

Once practice and qualifying got underway the additional “balance of performance” ballast was as expected a hindrance and local drivers were able to take advantage. Still, despite a temporary loss of power Morbidelli qualified on pole position for the second of the two championship races to take place on Sunday at this futuristic motorsport stadium, 20 km west of the country’s third-largest city.

“I knew that the time in testing was an illusion. Today, things are according to expectations given the extra weight I carry,” observed the Italian, referring to the imposed ballast. “The objective of the weekend for me will be to score as many points as possible and limit damages.” Morbidelli’s JAS Honda Civic TCR teammate Kevin Gleason was hampered during his run through qualifying. Nevertheless, the American starts two places behind in third place on the grid for race two tomorrow.

Morbidelli is just one point behind series leader Stefano Comini in the overall standings. Two 15 lap races lie ahead at this challenging circuit.